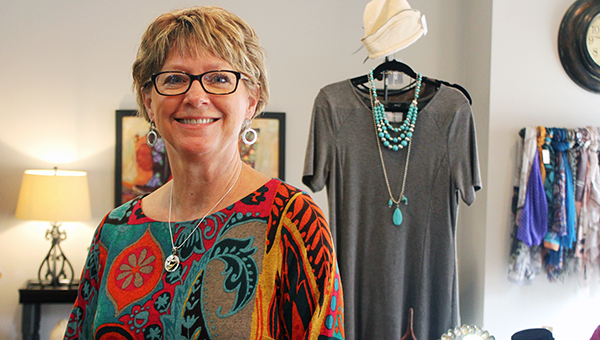 Becky Johnson of Albert Lea opened the Between Friends Boutique on North Broadway earlier this month. Johnson said she has always dreamed of opening her own store. – Sarah Stultz/Albert Lea Tribune

Albert Lean Becky Johnson has always wanted to open her own retail business.

That dream came true this summer with the opening of the Between Friends Boutique on North Broadway in the former The Wave studio. 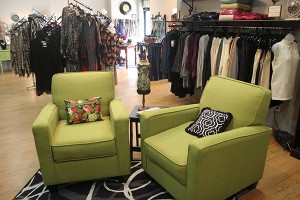 “I want this to be more than just a place to buy clothing,” she said. “I hope it will be more about the experience.”

Johnson, a mother of two grown children, has pictures posted throughout the store of her and clients and her and friends.

She was a stay-at-home mother for a long time, she said, and has also worked in real estate and at the Albert Lea clinic.

When it came time to open her store, she said she knew she wanted to be on Broadway, especially because of the renovations that have taken place downtown. 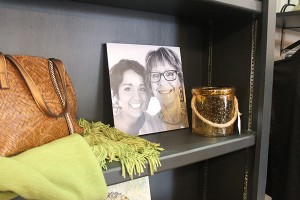 Photos of Becky Johnson and her friends and customers can be seen all over Between Friends Boutique. Here, she is pictured with her daughter, Ellie. – Sarah Stultz/Albert Lea Tribune

“It turned out to be the perfect size,” she said.

She got the space on May 1, and she and others began opening up some walls, painting, installing new flooring and moving in furniture.

She said thus far she thinks the store is doing well and has heard several positive comments throughout the community.

She hopes the store offers something that can’t be found anywhere else in Albert Lea.

“It’s just been incredible, really good,” Johnson said. “I hear the same thing over and over that Albert Lea needs this.”

Livelihood: owner of Between Friends Boutique in downtown Albert Lea

Interesting fact: When she’s not at her new store, Johnson can be found gardening, quilting, spending time with family and traveling.