The Hayward 4-H Club met for its monthly meeting and club tour July 11. 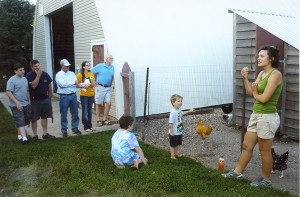 The Hayward club then enjoyed a potluck dinner with the July club meeting to follow.

The club meeting covered topics like community pride church paintings and Hayward Days club involvement. New business and upcoming events discussed were the county dog show July 19 and 20 at the fairgrounds, livestock interviews and 4-H exhibit building setup 2 to 8 p.m. July 22, Freeborn County Fair July 29 to Aug. 3 club involvement, state fair encampment Aug. 20 to 30, Freeborn County pasta fundraiser Sept. 14 at the Fairlane building and the tickets to sell for the event were handed out to families. In conclusion the Hayward club thanked the Otten and Tennis families for hosting this meeting and club tour and announced there will be no meeting in August. The next meeting is Sept. 14, a bonfire and potluck hosted by the Englin and Kermes families.