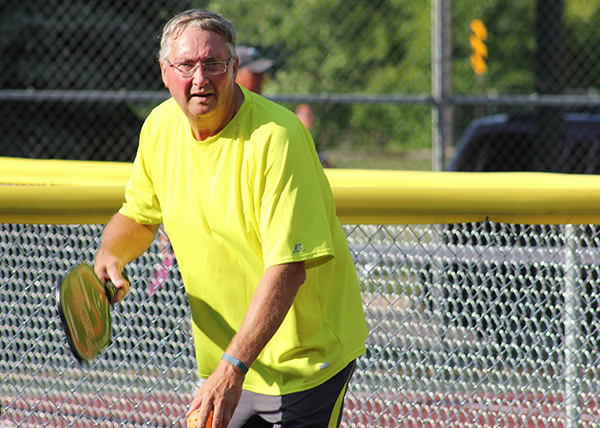 The first-ever tournament at the new pickleball courts in Albert Lea will be on Saturday with divisions for women, men and couples.

The tournament will begin at 1 p.m. at the courts next to the city pool. 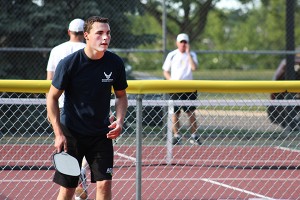 Zach Behrens anticipates the ball during a game of pickleball July 22 at the new pickleball courts. – Sarah Stultz/Albert Lea Tribune

The tournament comes just a few months after the city and a group of players started fundraising to renovate the courts. Since the upgrades were completed, the courts have gained popularity and on most nights are full with people checking out the sport.

The sport was invented in the mid-1960s on Bainbridge Island, Wash. The original purpose was to have a game where the entire family could play.

Pickles was the family dog that would chase the balls and hide in the bushes. The family would call to Pickles for the ball.

Pickleball now is played by people of all ages and levels.

“The thing I really like about it is it’s welcoming to everyone,” said Gail Levorson, one player.

At the end of July, players ranged in age from late teens to early 70s. 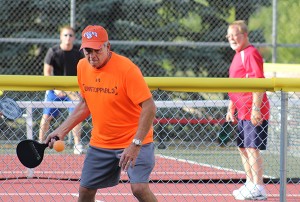 John Bauernfeind reaches back to hit the ball across the net in a game of pickleball on July 22. Bauernfeind said he has gained exercise and new friendships through the sport. – Sarah Stultz/Albert Lea Tribune

“It seemed interesting and something new and fun to do,” said Todd Eyler, 25.

Eyler started taking Community Education classes on pickleball last fall and got hooked on the sport.

“It’s fun because you can play with all ages — at any skill level,” he said. “Once you learn the fundamentals, the hardest part is keeping score.”

He said he comes once or twice a week to play.

The city kicked in $15,000 to renovate the Frank Hall Park courts, and the players, through donations from community, brought in money for the nets, poles and other equipment, Levorson said. Some of the big donors were Mayo Clinic Health System in Albert Lea and Mrs. Gerry’s. 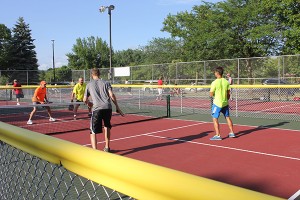 People play the sport of pickleball July 22 at the new courts in Albert Lea. There will be a tournament there on Saturday. – Sarah Stultz/Albert Lea Tribune

John Bauernfeind said he bought a house in the area about five years ago that he and his wife live in during the summer months, and said the sport has helped him get to know new people.

“What has come out of this for me is I have all these new friends,” Bauernfeind said. “Exercise and new friendships.”

He said to his knowledge there is not another place like it in Minnesota.

“This was a great opportunity because this was an unused asset,” he said.

Larry Knutson said he hopes to get rid of his diabetic medication through his participation in the sport.

Already since he has started playing he has dropped his A1C levels, a blood test used to diagnose type 1 and 2 diabetes. He is now only borderline diabetic instead of full-fledged diabetic.

Bauernfeind said it is the group’s goal to get so many people playing regularly that they can extend the courts into the last two tennis courts there. That would make an additional two to four courts.

Levorson said there are paddles and balls for people to borrow who don’t own their own, and people will take the time out to give lessons to new players.

Next summer, the group hopes to have a regionally sanctioned tournament there.