Memorial services for Raymond Troska, 81, of Alden will be at 11 a.m. Wednesday at St. Theodore’s Catholic Church. The Rev. Timothy Reker and Deacon Mike Ellis will officiate. Interment will be at Alden Cemetery. Military honors will be accorded by local servicemen’s organizations, VFW and American Legion. Visitation will be from 4 to 7 p.m. Tuesday at Bayview/Freeborn Funeral Home and one hour prior to the service at the church. Online condolences are welcome at www.bayviewfuneral.com. 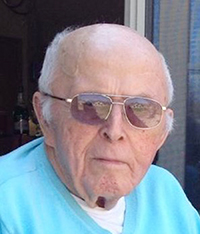 Raymond Francis Troska was born Feb. 2, 1933, in Wells, the son of Frank and Florence (Nowak) Troska. Ray grew up in Wells and attended St. Casmir’s Catholic Church in Wells. Ray served his country in the United States Army during the Korean War. After his discharge, Ray married the love of his life, Anne Marie Jenson, of Alden.  Ray and Anne owned their own dairy and crop farm. Together, they instilled in their five children a love and respect for nature and animals. He enjoyed woodworking and building custom birdhouses. Ray was a member of St. Theodore’s Catholic Church, the Alden American Legion, National Farmers Organization and served on the board of directors of the American Dairy Association. Ray got the most enjoyment from his family. He and Anne introduced their children to fishing and camping at young ages, and they all enjoyed this together until his Parkinson’s disease would no longer allow.  Ray and Anne took countless trips in their camper across the country. The mountains were his favorite destination.

After retirement, Ray went to work through Green Thumb as a Minnesota State Parks employee. He often said that Big Island State Park felt like a piece of heaven for him. Ray was a very gentle man. He never spoke ill of others. He will be remembered for his kind, quiet voice and his love of the land.

Ray was preceded in death by his parents, Frank and Florence Troska; brothers William Troska and Robert Troska; and brother-in-law, John Woitas.