Safflower will discourage pests, most birds 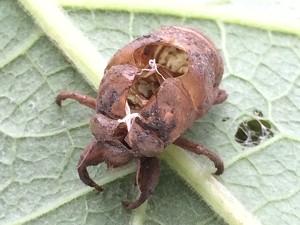 The exoskeleton of a cicada sits on a leaf. – Al Batt/Albert Lea Tribune

“Everything is nearly copacetic. I tossed and turned all night. That happens every time I eat rotisserie chicken. I’ve risen to the top of the bottom, but if I had my life to live over, I’d live over a bakery. Maybe I should follow Still Bill’s example. He’s economical with his sweat and considers laziness to be a labor-saving device. His hair has gotten so long, he has to climb a stepladder to comb it. That’s the only exercise he gets. He sees his dentist twice a year, once for each tooth. He flosses with a lariat. His doctor told him that taking a bath before retiring would help him sleep. Unfortunately, he won’t be retiring for another 10 years. His mother hung a rock from a stick outside her picture window. If the window breaks, she knows a strong wind is blowing. The railroad tracks run right through her house. She gets plenty of exercise opening and closing doors. When she hits her crazy bone, she aches all over. Still Bill and I are working on an invention. It’s a goldfish bowl that connects directly to a toilet bowl.”

The supply of sunsets isn’t infinite.

It’s a good idea to witness wonder whenever possible.

As the sun bid adieu, I roamed through the gloaming (twilight or dusk).

There was enough light for me to see a ravenous monarch butterfly caterpillar devouring a milkweed leaf. Beginning in late summer and into early fall, monarchs emerging from chrysalises are behaviorally different from earlier generations. They aren’t mating or laying eggs. They focus on fattening up for long migrations to winter habitats — central Mexico for monarchs east of the Rocky Mountains and coastal California for those west. It’s an epic journey that no good travel agent would recommend.

I took a pair of ZEISS Victory SF binoculars for an extended test look. I did so because I wanted to see more. And I did. They were a delight to hold and afforded slick focusing. The high-end binoculars performed well under challenging light conditions. They worked like binoculars should. Putting them to my eyes was like turning a light on in a dark room.

I didn’t need binoculars to see that the DNR building at the State Fair is celebrating its 80th anniversary. About 500,000 people visit the DNR building annually. The building cost $73,000 to build, almost 10 times the net profit of the 1934 State Fair when gate tickets cost 25 cents. The combined indoor fish aquarium capacity of more than 5,000 gallons of water is the same amount the average family of four uses monthly. The outdoor fish pond holds 50,000 gallons of water displaying 45 species of native fish. The largest fish exhibited is the lake sturgeon, which exceeds 50 inches.

“When do the first cicadas call?” In southern Minnesota, I hear their opening announcements in June or July. The average date is around July Fourth with the latest just short of the ides of July. The buzzing call is made by males to attract mates. Annual cicadas lay eggs in twigs. The young burrow underground and feed on sap from roots. Incorrectly called locusts, cicadas whine on hot days and let us know it’s summer.

“How old are sandhill cranes before they can fly?” The colts fly at about 10 weeks of age.

Leon Schoenrock of New Richland saw triplet fawns and asked how common they are. The nutritional status of pregnant females can influence the number of fawns born. Triplets are more common where deer don’t contend with severe winters and have a reliable food supply. After a gestation period of 196 to 213 days, most fawns are born in late May and early June. A doe giving birth the first time usually has one fawn. From then on twins are common and triplets frequently occur. A fawn weighs about 7 pounds at birth.

“I heard a bird singing the first few notes of Beethoven’s Fifth Symphony. What kind was it?” The song sparrow is a persistent singer whose pleasant song sounds like that. Thoreau described it as, “Maids! Maids! Maids! Hang up your tea kettle-kettle-kettle.”

Emily Menssen of Sherburn asked why there are so many wasps and turkey vultures. Increased food supplies, higher winter survival of queens, a decrease in natural enemies, successful broods due to mild weather and a sustained food supply boost wasp numbers. Wasp larvae feed on caterpillars, spiders, cicadas, etc. An increase depends on the alignment of favorable conditions. Vultures are adaptable to humans. Vultures are disease control mechanisms with an ability to metabolize natural biotoxins found in decaying flesh. Scavenging vultures were so highly valued by ancient Egyptians that one pharaoh decreed the death penalty for anyone killing a vulture. Several factors have brought about increased populations — the banning of DDT, fewer people shooting them and increased deer and small mammal numbers resulting in plentiful roadkill.

“Do feeders become busier when a storm is coming?” Birds don’t wait for holidays to overeat. Low-pressure brings storms, meaning birds might have difficulty feeding and are forced to hunker down. They stock up just as we do when we run to the supermarket when storms are predicted.

“We know nothing of tomorrow, our business is to be good and happy today.” — Sydney Smith

“Today I have grown taller from walking with the trees.” — Karle Wilson Baker