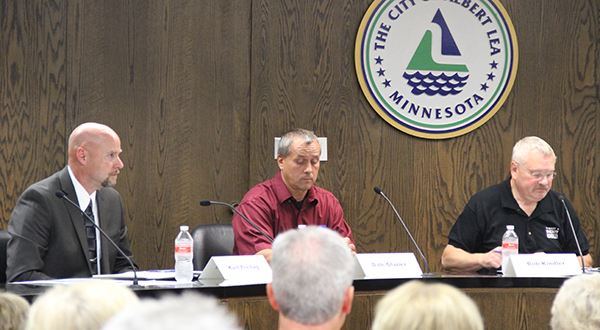 The three candidates for the office of Freeborn County sheriff listen as moderator Tim Engstrom, editor of the Tribune, reads a question. – Sarah Stultz/Albert Lea Tribune

Tension was high Wednesday night at Albert Lea City Hall in a public debate for the three candidates running for Freeborn County sheriff. 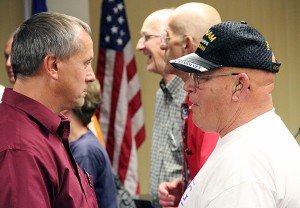 More than 125 people attended the debate, with many standing in the back and sides of the room; some were even in the hall.

The candidates, deputy Kurt Freitag, deputy Dale Glazier and incumbent Sheriff Bob Kindler, answered questions about everything from their priorities for the seat to increased communication to the Immigrations Customs and Enforcement agreement.

While Freitag and Glazier accused incumbent Kindler of having weak leadership, a top-heavy administration and poor communication, Kindler defended his actions, sometimes calling his opponents “misinformed” or even “false.” He pointed to what he thought were some of his strengths in the last four years and talked about integrity being a part of his campaign slogan.

“I have nothing to hide,” said Kindler, who is completing his first term. “Being fair and honest is part of having integrity.” 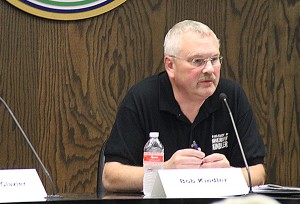 Kindler, 55, said he moved to Freeborn County in 1987 as a patrol deputy for the Sheriff’s Office and has been married for 31 years.

After serving as patrol deputy, he said he has been detective, detective-supervisor and now sheriff.

He said he has attended numerous leadership trainings.

When he ran for office four years ago, Kindler said he sought to eliminate some of the wasteful spending of overtime, along with update equipment and be honest and respectable.

He said he has spent 21 years in law enforcement with 19 in Freeborn County. He has also spent 20 years in the Army National Guard, 17 of which were in leadership positions. He said he wants to increase the patrol presence, increase quality investigations and improve overall services to county residents.

“Through competent leadership, morale will naturally improve,” he said.

He also hopes to bring in as much as possible for the Immigration and Customs Enforcement agreement.

Glazier, 50, said though he is not a politician, he is the only candidate truly from the local area. He grew up in Wells, worked there as a farm-machinery mechanic and moved to Freeborn County in 1988.

He and his wife, Brenda, have one son. 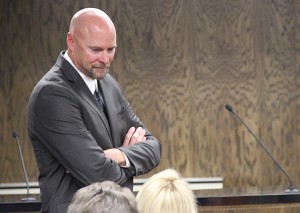 Glazier said he hopes to improve communication, work better with other agencies, bring back the county’s canine unit and improve patrol presence, to name a few.

He started with the Sheriff’s Office 11 years ago.

Plans of response to a school shooting

Both Freitag and Glazier said if there was a school shooting, the patrol deputies have not been advised of a plan for how to respond.

They said they think patrol staff should be informed of this plan and be aware of the floor plans of each of the schools.

He said the department has gone through training that would be helpful in case of a school shooting though it may not have actually been practiced firsthand in a school.

Freitag said his top priorities if elected would include being financially responsible, working within the budget, giving deputies a better work environment and trying to expand the income coming from the ICE agreement.

Glazier said he believes communication would be his top issue. He also has safety concerns and wants to increase training for the patrol staff.

He, too, talked about the need for increases to the ICE agreement and noted he thinks the canine unit should be brought back to help deputies look for drugs.

He would also work on fiscal management in the department and find ways to improve services for residents.

Kindler said he has 28 years of experience, including investigating contracts and frauds and most recently his four years in the position.

He said he has worked with the budget so the department can do more with the funds available to them.

Freitag said through his experience in the Army he was platoon sergeant and was in charge of much of the equipment.

He noted he thinks budgets are made of common sense and that he has always been good at handling money.

Glazier said though he has not handled a budget as large as the one in the Sheriff’s Office, he does have a successful farming operation and noted the need for common sense.

He claimed some of the spending made recently in the department has been for personal use.

Freitag said Freeborn County lost more than $550,000 in revenue from 2011 to 2013 as numbers for the ICE contract have declined.

He claimed that the transport deputies were instructed to tell federal officials that the jail is full, even when it is not, and said if he is elected this would stop.

Glazier said he would support using the jail to house the ICE inmates and supports ramping up the agreement.

Kindler called the other two candidates “misinformed” about the ICE program and said it is false to say that the transport deputies are refusing people.

He said ICE has reduced the number of people it has picked up around the country because funding from the federal level has decreased.

Immigration reform has also played a factor, and local officials are required to house detainees based on classifications.

Freitag claimed the jail officials intentionally misclassify inmates, including Albert Lean Chad Gulbertson, who has since been convicted of murder.

Some controversy centered on the sheriff’s pay and Kindler’s prior decision to sue regarding his salary.

Kindler said when he was elected sheriff, he met with the Freeborn County commissioners in 2010 for a wage negotiation. The wage he asked for was the same wage he had as detective supervisor.

When the issue came before a vote, the commissioners voted a salary that was $9,000 lower.

“I believe that at the time it was right (to sue),” he said. “I should have at least been paid what I was paid the year before.”

He said he has since moved on from the board’s decision and has developed a good relationship with the commissioners.

Freitag and Glazier said they are not worried about the pay in the position, and they would not sue the county like Kindler did.

The day Glazier filed for office, he was put on paid leave as authorities began looking into a claim of misconduct. Though that claim has since been dismissed, people still question what took place and whether the move was political.

Kindler pointed out that the incident in question took place a week before Glazier was put on paid leave.

He talked about how as soon as he found out about the claim, he removed himself from the case and asked the county administrator and county attorney to take charge.

He claimed he did not know the names of the people involved and said it was not a political move.

“People have tried to make it that way, but it is not,” Kindler said.

Freitag said he thought the situation could have been handled differently and does not believe Kindler’s claim that he did not know about the investigation.

Glazier also said he thought the incident was handled poorly and said he has an inside source that stated Kindler had the paperwork from the investigation on his desk.

Glazier also claimed it took him seven weeks to get the complaint against him.

“That is just wrong,” he said.

“I don’t have any reason why I’d support somebody here tonight,” Kindler said.

Other issues discussed included the costs of running for office, what community work the candidates are involved in and accountability for the deputies, among others.

Many supporters from all sides were present at the debate, seen wearing shirts of support or talking with the candidates before or afterward.

The debate was put on by the Albert Lea-Freeborn County Chamber of Commerce. Tribune Editor Tim Engstrom was the moderator. It was aired live by KATE AM Radio and a video will be replayed over the city’s cable-TV channel.

The primary election is Tuesday. Two candidates will move on to the general election.