The seasonal schedule of spiders and distinguishing butterflies

“Everything is nearly copacetic. I worry that I haven’t done anything with my life, then the NFL season starts and I’m OK. I remember when I knew more than my cellphone. It’s so smart, it makes me seem like poop on a scoop in comparison. I had a cold pizza for breakfast. I don’t like pizza so hot that it tastes like boiled roof of my mouth. I believe in giving pizza a chance. I have a black belt in eating cold pizza. I wasn’t going to eat pizza for breakfast anymore, but it was a special occasion. I was up. I was out of coffee, so I drank ketchup. I pretended it was a tomato smoothie. Pop was at the supermarket and thinks pulling shopping carts apart should be an Olympic event. I wouldn’t say Pop was old. I’d say he’s really old. He was around when rocks were soft. Pop asked if I minded if he spoke candidly. I didn’t even know he spoke Canadian. I thought he was going to tell me that he was worried about not hearing anything about hearing loss, but he told me that he’s not afraid of dying. He’s afraid of being reincarnated. I think he’s been spending too much time around his grandchildren.” 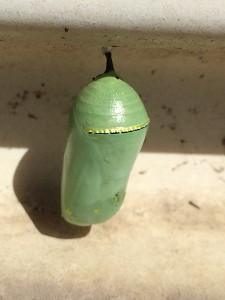 It was a beautiful day, the latest model.

It wasn’t such a beautiful day for a masked bandit.

Someone had supported our local vultures by running over a raccoon.

When I was a boy, a perfect day was one in which I turned over rocks, poked things with a stick and put creatures in a jar. A jar of fireflies made a fanciful flashlight. The best part wasn’t catching the lightning bugs. It was letting them go.

Now I’m contented to bear silent witness to much of what happens in nature.

I’ve gone through a lot of grape jelly feeding the Baltimore orioles this year. More than ever before. I love orioles, but Famous Amos cookies might have been cheaper guests.

There is a wildflower blooming in my yard. It’s called white snakeroot. The story is told that Nancy Hanks, Abe Lincoln’s mother, drank milk from a cow that had eaten white snakeroot. She was reputed to have died from the ensuing “milk sickness.”

Dooryard birds, in plumage both elegant and otherwise, were evident. A cardinal clicked like a Geiger counter as a catbird sang small bits of its wonderful scat song. It could just as easily have been named scatbird. A male goldfinch flew a figure eight over my head. He looked like dancing sunshine.

I left the library in Madelia after doing a program and book signing at that wonderful place. I was pleased to see that the airspace overhead was filled with common nighthawks and their “peenting” sounds.

Earlier in the year, I spent a happy hour watching and listening to nighthawks booming near a school in Morgan. As air rushed through the male’s wing feathers during the territorial display, it produced booming sounds.

Billy Steiner of North Mankato wrote, “My wife has noticed an unusual number of spider webs around our yard. Are they telling us something or is this normal.” Spiders have seasonal schedules. Many species hatch in the spring, reproduce and die in the fall. Some survive the winter. Most spiderlings lie low in early summer (trying to keep from being eaten) and the survivors are large enough to spin webs later in the summer. Warm temperatures allow flying insects to prosper. Spiders feed on flying insects like flies and mosquitoes. When the population of the insects increases, spider populations can increase, but the main reason for more cobwebs is the maturation of spiders. Spider populations aren’t an indication of what winter will bring.

“How can I tell a monarch butterfly from a viceroy?” On average, the viceroy is smaller than the monarch, but some monarchs are smaller than some viceroys, so size isn’t a good way to tell them apart. A viceroy has a black line across the hindwing that monarchs lack.

“How does the male cardinal become so red?” The cardinal’s red color comes from substances called carotenoids, pigments found only in plants. Any animal that uses carotenoids for coloration, including most red, orange, or yellow birds, must get it from what it eats. Cardinals need carotenoids to be red and carotenoids are common in the fruits and berries they eat.

“What are the seeds of a maple tree called?” Samaras. I’ve heard them referred to as helicopters, spinning jennies, whirligigs, whirlybirds and wingnuts.

The owner-operator of a lawn-mowing service told me that he often spends more time in the beautiful yards than the owners who are typically too busy. He wondered aloud, “When do we have enough?”

Fish-eating grebes can’t readily digest fish bones. They pluck and eat some of their own feathers. These feathers create a filter that traps the bones in the bird’s stomach before they can enter the intestine. There, the bones slowly dissolve until they can be more easily passed.

More than 350 species of bees live in Minnesota.

The name “Alcatraz” is attributed to the Spanish word for pelican, which is “alcarez.” It’s doubtful that pelicans nested on Alcatraz. Don Juan Manual Ayala named the rock for the birds he saw there, but he might have called it “alcatraceo,” the Spanish word for cormorant.

A robin could eat 14 feet of earthworms per day.

A dragonfly eats as many as hundreds of mosquitoes per day.

Swallows drink and bathe on the wing, dipping down to take mouthfuls of water or touch bodies to the surface for a quick rinse. They feed almost exclusively in flight, by catching insects.

The burrows of cicada killer wasps are 6 to 10 inches deep.

6 p.m. Sept. 2 at Edgewater pavilion. At 7 p.m. there will be a photography presentation by Darcy Sime, free to the public.

“All of us need to keep in touch with wild, unruly things, even if we do it in the tamest possible way.” — Maggie Nichols

“If you judge people, you have no time to love them.” — Mother Teresa