The United States has boundary disputes

Anyone who has been to the conference room at the Albert Lea Tribune knows there is a large National Geographic wall map of the world. On this map are shown some of the international border disputes.

Probably the most well-known one is the dispute India and Pakistan have over Kashmir. Other disputes are between Egypt and Sudan, China and Russia and China and India. The map doesn’t reveal the multitude of  international border disputes, probably because they either are long established or minor. At some point, a world map cannot show each and every one for reasons of space. 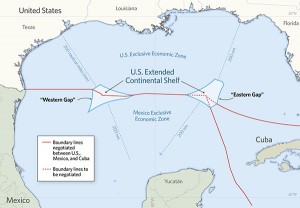 This map from the Heritage Foundation shows two gaps in exclusive economic zones in the Gulf of Mexico. The Western Gap was resolved in 2000. The Eastern Gap remains unresolved.

Syria and Israel dispute the Golan Heights, which Israel controls. Tonga and Fiji debate over the Minerva Reefs. Guatemala and Belize fight over the southern half of Belize, and Guatemala used to claim all of Belize. Canada and Denmark dispute tiny, uninhabited Hans Island. The United Kingdom and Spain disagree on Gibraltar. Turkey and Greece disagree on borders as they have for centuries, and you all know about the Crimea quarrel between Ukraine and Russia. The list is endless and happens all over the globe.

What’s interesting and unexpected is that the United States has many border disputes.

One is the Black Hills themselves. It remains claimed by the Sioux Nation and recognized by the federal government under the 1868 Fort Laramie Treaty. Long story short: The federal government went back on its word and forced the removal of Indians from the sacred Black Hills to make way for white settlers and mining claims in the Black Hills. Despite attempts in the 1970s, 1980s, 1990s, 2000s and 2010s to settle the matter, it remains unresolved. I say just give the whole place back, but who listens to me?

In the Gulf of Maine, Machias Seal Island is claimed by Maine and New Brunswick. Canada has a lighthouse on the island and maintains the land as a bird colony, but it is closer to the United States. The island and an island called North Rock lie in an area of the maritime boundary called the gray zone. The countries have avoided settling the issue.

The United States and Canada disagree on several water borders. One is the Dixon Entrance dividing the end of the panhandle of Alaska from British Columbia. The 1903 Alaska Boundary Treaty set a line dividing the two between a spot on the mainland and a spot on an outer island. Canadians feel that line is the maritime boundary, too, while the United States says the maritime boundary would be equidistance between the U.S. islands and Canadian islands to the south. The line would determine the boundary between exclusive economic zones out into the Pacific Ocean for 200 nautical miles.

Another is at the Strait of Juan de Fuca between Washington state and British Columbia. The boundary is the middle of the strait. That is agreed upon. But the angle that boundary extends 200 nautical miles out into the Pacific Ocean for exclusive economic zones remains disputed. It could be resolved by applying what’s called the principle of natural prolongation, but the precedent would cost Canada’s claim on Machias Seal Island.

There is a wedge-shaped slice of land rich in oil in the Arctic Ocean’s Beaufort Sea north of Alaska and Yukon. Canada says the maritime border ought to follow the north-south border between Alaska and Yukon. The United States says it ought to be equidistant from the coasts. Despite being so remote and frigid, this is probably our country’s hottest border dispute.

The United States is square with Mexico on that land boundary — the busiest border in the world. Shifts in the Rio Grande caused problems in the past but have been resolved, the last in 1977.

As far as the maritime boundary, two gaps are created in the Gulf of Mexico for economic zones. The U.S. solved its dispute with Mexico on the Western Gap in 2000, but the Eastern Gap includes Cuba and remains unresolved.

Who knew we have more boundary disputes with Canada than Mexico?

Several countries lay claim to a reef in the Caribbean Sea. Colombia controls Baja Nuevo Bank and maintains a lighthouse there that looks more like a short radio tower with a light on top, but the United States, Jamaica and Nicaragua claim it, too. Nearby, there is Serranilla Bank, only the claimants are Columbia, United States, Honduras and Nicaragua.

The International Court of Justice ruled in favor of Colombia in 2012 for both reefs.

Navassa Island in the Caribbean Sea west of Haiti is administered by the United States as a wildlife refuge but claimed by Haiti in its constitution. People have been known to camp on the uninhabited island. A former U.S. Coast Guard lighthouse still stands but does not shine.

Here’s to hoping you have a friendly boundary with your neighbor.