“Everything is nearly copacetic. I’m trying to eat more green things, but that meat in the back of the fridge isn’t very tasty. I talked to a neighbor the other day. He was talking about drainage. I didn’t ask if he was referring to farming, gardening or a medical procedure. Whatever it was, he’s worried about what it will cost. We all worry about money. I’ll make six figures this year. That’s if you count all the numbers on both sides of the decimal point. Life isn’t fair. Still Bill, laziness walks in his family, will still make more money than I do. He chews a banana for an hour because he’s too lazy to peel it. There’s no excuse for laziness, but Still Bill and his brother Stan Still have dedicated their lives to finding one. A tree fell on Stan’s car. Stan Still, he has a great fear of his own sweat, blames it on timber martial arts. He claims the tree was Spruce Lee. Remember that exquisite sunset the other day. It was the prettiest I’ve ever seen. Still Bill missed it. He was facing the wrong direction and was too lazy to turn around.” 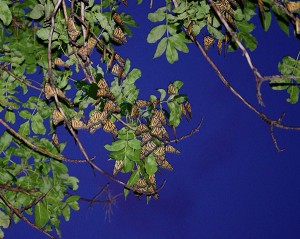 A green darner dragonfly zipped by, changing course at speeds up to 35 mph. I walked near a large spider web. The spider closed like a fist. The hummingbird feeders hummed with activity. One was king of the mountain and chased all others away. It was a playground bully protecting nectar. The yard turned into a battlefield. Julie Bronson of Glenville sent me a wonderful photo of congregating monarch butterflies. The butterflies got along much better than ruby-throated hummingbirds.

Harvey Benson of Harmony sent me a “Peanuts” cartoon. Snoopy is sitting on top of his doghouse. Snoopy thinks, “I get along quite well with most birds. In fact, I’m quite fond of all of them, except…”

A bird flies at Snoopy causing him to leap out of the way.

Snoopy thinks,”…blue jays who scare me to death!”

Blue jays frequently mimic the calls of hawks. These calls may alert other jays to a hawk’s presence or may be used to deceive other species into believing a hawk is near.

Leo Skorin of Albert Lea asked if red-eared slider turtles could survive in our lakes. The red-eared slider, probably the most common turtle sold in pet shops nationwide, isn’t native to Minnesota. The slider name refers to the turtle’s ability to slide quickly off rocks or logs when threatened. Escapees may compete with native turtles for food, nesting sites and the best basking areas. Pet turtles can harbor diseases like salmonella that could spread to wild turtles. Released red sliders have been found in southern Minnesota lakes, but it’s doubtful that the southern turtles can breed or long survive.

“How can I tell if it’s an apple or a crabapple tree?” A simple method is to look at the fruit. Any fruit less than two inches in diameter is considered a crabapple, anything larger is an apple.

“How many species of butterflies are there in Minnesota? There are at least 161 butterfly and 370 moth species.

“When can I see fireflies in Minnesota?” Lightning bugs are typically glowing around damp areas from May through July.

“Why do mourning doves fight so much at my feeders after the breeding season?” Doves fight to establish a pecking order.

“What are the large snails floating on Albert Lea Lake?” They are Chinese mystery snails. This snail is native to Asia and was likely introduced via aquarium dumping. They are called mystery snails because they give birth to fully developed snails that mysteriously appear in the spring. After reproducing in their fourth year, they die and their shells wash ashore.

The DNR’s August roadside survey of pheasants showed a 6 percent increase from 2013.

This in spite of a severe winter, a slow start to spring and heavy rains in June. There were 28.7 birds seen per 100 miles of roadside driven. The highest counts were in the southwest, south-central and west-central regions. The 2014 pheasant index is 58 percent below the 10-year average and 71 percent below the long-term average. Weather and habitat are the main factors driving pheasant populations. Weather causes annual fluctuations. Available grassland habitat for nesting drives long-term patterns. The loss of Conservation Reserve Program acres is the primary reason for the steady decline in Minnesota’s pheasants. The 2014 pheasant roadside counts show improvement over last year, but it’s believed there were more birds last year than were counted due to late hatches. There was an 18 percent increase in hens from 2013. The number of broods observed per 100 miles increased 28 percent and the number of broods per 100 hens increased 3 percent. The average number of chicks per brood was down 15 percent compared to 2013, which may be related to heavy rains in June. The median hatch date of nests was June 16, five days later than the 10-year average. The survey consisted of 171 25-mile long routes. Observers drove in early morning and recorded the number and species of wildlife seen. Cottontail rabbit numbers increased 11 percent from 2013, remaining below the 10-year and long-term averages. Gray partridges decreased 13 percent and are well under the 10-year and long-term average. Mourning doves decreased five percent, well below the 10-year and long-term average. The white-tailed jackrabbit index was similar to last year, still at a historic low. The white-tailed deer index was similar to 2013, 20.8 deer per 100 miles, which is 34 percent above the 10-year average and 109 percent above the long-term average.

“It is not only fine feathers that make fine birds.” — Aesop