A gathering for family and friends to celebrate the life of Diane D. Lawson will be from 2 to 5 p.m. Sunday at Brick Hall in Myrtle. Diane died Wednesday, Sept. 10, 2014 at Thorne Crest Retirement Community. Online condolences are welcome at www.bayviewfuneral.com. 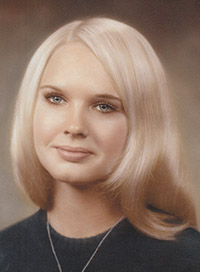 Diane Diedré Lawson was born March 19, 1953, in Albert Lea, the daughter of Willard and Charlene (Clasen) Perleberg. She attended school in Glenville and worked at various places including Weyerhaeuser, Hormel and Shade Tree.

On April 3, 1971, Diane was united in marriage to Kenneth Lawson in Monroe, Wis. She enjoyed gardening, spending time with friends and family and cooking. Diane was a member of the Glenville American Legion Auxiliary.

Diane was preceded in death by her mother, her grandparents and her in-laws.

Diane always put other people’s needs before herself and was very generous. She is greatly loved and will be greatly missed.