Downtown is beautiful, but what could be next? 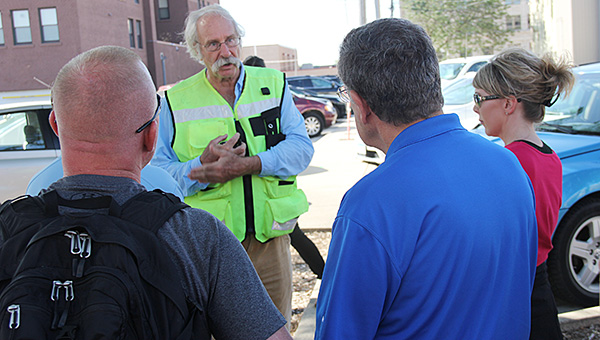 Transportation expert Dan Burden speaks with a group of Albert Lea residents Thursday morning in downtown Albert Lea. He praised the reconstruction of downtown and had ideas to further improve the place. – Tim Engstrom/Albert Lea Tribune

Albert Lea has done a fine job with the reconstruction of its downtown, said Dan Burden, an expert on livable communities, healthy streets and traffic calming.

He led about 30 people on a walk around downtown starting from Albert Lea City Hall. He said Albert Lea has a beautiful waterfront and does a good job of playing with the elevations, such as the grand staircase at Fountain Lake Park. 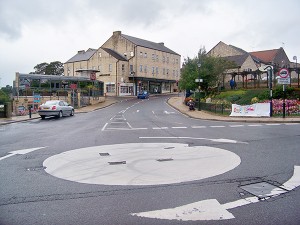 An example of a mini-roundabout in the United Kingdom. – Wikimedia

He said downtowns in any city succeed when they are seen as a place to be culturally.

“All towns have to work from a point of view as a great destination,” Burden said.

The walking audit of downtown Albert Lea was part of the Blue Zones Project returning to Albert Lea, sponsored by Healthways. The city had been a pilot in 2009 for the Minneapolis-based Blue Zones organization providing advice to cities on how residents can live healthier, happier, longer lives.

Being more walkable and livable — such as seating outdoors — contribute to making a downtown a destination.

He had high praise for Albert Lea’s new downtown and said the curb extensions and stop signs have made it more friendly to people on foot. As a benefit, there is less waiting for motorists and pedestrians alike than when Broadway had stoplights.

But he also gave suggestions for improving the downtown further.

Downtown Albert Lea has an abundance of space for outdoor seating. The next step is in the details, such as which way to face the seats. He said people generally like looking at water, so it would be good to have some seats facing north toward Fountain Lake. In some places, there is the question of facing the building or the street. He said with a beautiful new Broadway streetscape, it would be best to face the “lovely street.”

He said much more could be done with alleys and back parking lots. He threw out the term “authentic placemaking,” building environments to attract people. A parking lot goes from being merely asphalt to being near art, flora, wooden walkways or additional shopping, like when a store sets up extra retail space outside. It can be called cultivating the in-between spaces.

In the summer of 2015, Broadway will receive a bituminous mill overlay from its intersection with Main Street all the way down to the interchange with Interstate 35. City officials sought Burden’s input on the downtown portion of that work, generally between Main and Front streets.

“It needs to be treated as a gateway and become much more attractive,” he said.

That segment doesn’t need four lanes, he said. It could have three lanes, one lane for northbound cars, one for southbound cars and a center lane for turning. He said it then could have bike lanes and, possibly, parking areas. The concept is called a “complete street,” something Burden advocated when he visited in January 2009 as part of the AARP/Blue Zones Vitality Project.

According to the National Complete Streets Coalition, an incomplete street is one designed with only cars in mind. A complete street can look different in varying locations, but in general it seeks to get more productivity out of streets for modes of travel, to design for cars, bikes, buses, walkers and so forth.

“Four lanes only creates an abusive behavior by cars that the street is only for cars,” Burden said. “That deters pedestrians.”

What’s more, Burden suggested what’s called a “mini-roundabout” for Broadway and Main. It would fit within the existing space available and is not anything like the full roundabout found near the Medford Outlet Mall. The central island is small and can be driven over by semis and large trucks.

The Federal Highway Administration says mini-roundabout enhances safety for drivers by allowing more time to make decisions, reducing the number of directions a driver must watch and reducing the need to judge gaps in traffic.

Albert Lea Public Works Director Steve Jahnke said he appreciates the positive comments and good ideas from Burden. Now, the city would need the resources and public support to implement the ideas.