Editorial: The ISIS threat is not going away

Beheading kidnapped American journalists would seem to invoke the ire of the American public, not intimidate them. We cannot imagine any scenario where the American people say to their federal government: “Please stop bombing the Islamic State of Iraq and Syria rebels in Iraq because we are afraid of what that group might do to people abroad or here in America.” 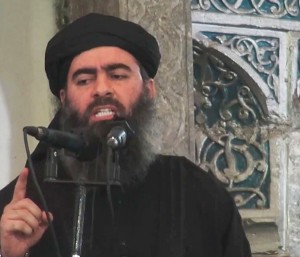 Warlord Abu Bakr al-Baghdadi is the leader of the Islamic State of Iraq and Syria and, according to multiple news reports, glorifies the killing of innocents.

No, the Islamic State leaders are making a serious strategy miscalculation. If anything, Americans are likely to ramp up their involvement in securing peace in Iraq, not notch it down. Americans are more likely to destroy the existence of ISIS altogether than to shrink away from it.

Look at history. Americans since World War I have wanted less involvement in overseas wars but time and again we go to war, usually reluctantly and after our hand is forced. The pattern is this: Support, then mission creep, then all out war. It would be strategic for ISIS to just leave the United States alone and keep its terror outfit out of American headlines.

Unfortunately that’s not how ISIS members see the world. It’s clear at this point they want to strike America or at Americans. Meanwhile, the Iraqi government seems weak and helpless under Nouri al-Maliki to take swift action and defeat the threat. The No. 1 priority for Americans is ousting al-Maliki and forming a fresh government to take on ISIS, which some foreign advisers say is a greater international threat than al-Qaida ever was.

We don’t want all-out war, but it might have to come to that. Going to war is not something that Americans want to hear these days, but there could come a point where avoiding war for the sake of avoiding war will mean thousands of American sons and daughters will have died in the Iraq War to oust Saddam Hussein and install what appears to be a weak democracy that ISIS simply crushed while terrorizing the Iraqi public. That cannot happen. We’ve come this far. We can’t drop the ball. America has a responsibility at this point to ensure success long term in Iraq.

Our country still has troops in other democracies we have guided to success, such as Japan, South Korea, Italy and Germany. There is nothing wrong with maintaining peace in Iraq, too. It’s unfortunate, but perhaps more than just an air war against ISIS also would be a necessary evil for the sake of good. Americans ought to be prepared to eradicate ISIS head on. We made the error of committing to reshaping Iraq in 2003. We are stuck with the mess now.