Funeral services for Gertrude J. Sorenson will be at 10:30 a.m. Monday at Ascension Lutheran Church in Albert Lea. The Rev. Mark Boorsma will officiate. Visitation will be from 4 to 7 p.m. Sunday at Bonnerup Funeral Chapel and again one hour prior to the service at the church. Interment will take place at Graceland Cemetery. 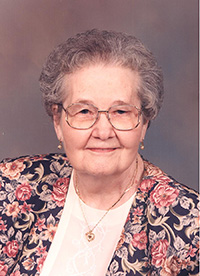 Gertrude was born Feb. 12, 1915, to Andrew and Hilda (Watne) Bergeson in Lime Springs, Iowa. The family soon moved to the Freeborn County area where she continued to be a resident all of her life. Gertrude attended public schools in Freeborn County.

Gertrude was united in marriage to Alvin Sorenson on Sept. 3, 1936, in Albert Lea. To this union four children were born. Religion was very important to Gertrude. She was one of the charter members of Ascension Lutheran Church and was actively involved in Church Women United. Before she was a member at Ascension she was an active member at First Lutheran Church. Gertrude was also a member of War Dads Auxiliary and active in the Sertoma Club. She also volunteered her time at St. John’s and the Albert Lea Public Library. Gertrude spent her time raising her family and taking care of the house. She enjoyed cooking, sewing, quilting and — most importantly — spending time with her family.