Katelyn Hoium and Cody Rush, both of Wichita, Kan., were married at 5 p.m. May 17, 2014, at Hyatt Regency in Wichita in a double ring ceremony. A reception immediately followed the ceremony. 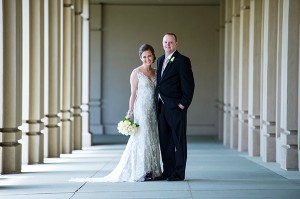 The bride graduated from Albert Lea High School in 2006 and Gustavus Adolphus College in 2009. She is employed by Cargill.

The groom graduated from Brewster High School in 2000 and Kansas State University in 2004. He is employed by Cargill.

The flower girl was Chloe Cox, daughter of Cayla and Joe Cox, of Norton, Kan. She is the niece of the groom.

The ring bearer was Jayton Rush, son of Jessica and Clay Rush, of Levant. He is the nephew of the groom.

Music was provided by Musical Elegance String Quartet of Wichita.

A wedding trip to Ocho Rios, Jamaica, was taken following the wedding.