Funeral services for Margaret Kruse were at 10:30 a.m. today at St. Theodore’s Catholic Church in Albert Lea. The Rev. Timothy T. Reker and Deacon Mike Ellis officiated. Visitation was one hour prior to the service at the church. She was interred in St. Theodore’s Cemetery. 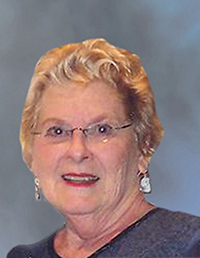 Margaret Ann Kruse, 80, died at her home in East Gull Lake on Saturday, Sept. 6, 2014, from pancreatic cancer. She was born in Albert Lea on Feb. 20, 1934, to Roscoe and Alta Maxwell. She was a lifelong resident of Albert Lea. She graduated from Albert Lea High School and was a member at St. Theodore’s Catholic Church and the Albert Lea Social Sorority.

She married Daniel Kruse on June 22, 1957, at St. Theodore’s in Albert Lea. They were married for 41 years. Margaret was a receptionist for Dr. Nils Schoff for many years and worked at Wallace’s Department Store. She was an avid traveler, enjoying her home on Gull Lake for many years. She loved animals and birds and continually supported the Humane Society. Margaret was also involved with the bowling league. She won Miss Albert Lea and was runner-up Miss Minnesota in 1955.

She is survived by daughter, Mary (Doug) Fenton, of Carlsbad, Calif., and their children Nicole and Peter; sons Mark Kruse of East Gull Lake and Mike (Deanne) Kruse of Brainerd and their children Mason, Halle and Haden; brother, Robert (Connie) Maxwell, of Albert Lea; and many nieces, nephews and cousins.

She was preceded in death by her parents, Roscoe and Alta Maxwell; husband, Dan Kruse; and sister, Dorothy Emstad.