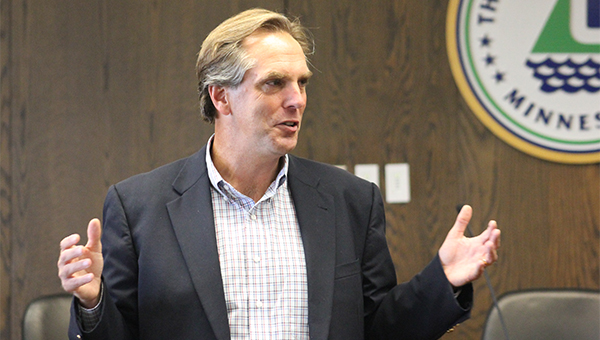 Calling it a “train that continues to wreck,” Republican U.S. Senate candidate Mike McFadden on Thursday criticized the Affordable Care Act and particularly the effects of Minnesota’s online health exchange.

In Albert Lea City Hall on a brief visit with local Republicans, McFadden encouraged people who are affected by the health care law to speak out about its effects.

McFadden said he has heard from residents who have seen 50 percent proposed increases in their health insurance premiums for next year and other small business owners who have said they can’t afford the increases.

“The biggest lie of all from the president and Sen. Franken is that this would make health care more affordable,” McFadden said.

With this week’s announcement that provider PreferredOne will depart from MNsure, he said costs are only expected to rise even more. He said Preferred One provided 60 percent of the premiums for MNsure.

The statements came after the Star Tribune released a poll earlier this week showing Franken leads McFadden by double digits.

McFadden claimed Franken is not accessible to the media or the public, saying if he were elected he wouldn’t hide.

He said he challenged Franken to six debates, but Franken has only agreed to three. He noted that Minnesotans deserve to be able to hear from the candidates about their viewpoints.

He hopes to get the country back on track to prosperity through energy, education and effective government.