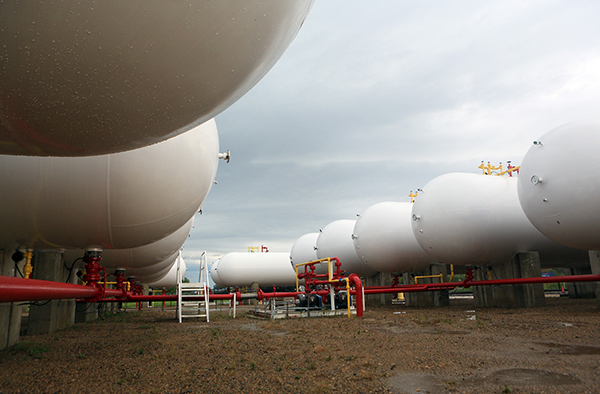 The expanded Rockville Propane Terminal in St. Cloud includes 16 tanks with the storage capacity of 620,000 gallons, and the facility has the ability to unload 10 railcars every 4 1/2 hours. CHS Inc. and Wenner Gas expanded the terminal.
– Jeffrey Thompson/
MPR News

TRUMAN — The severe shortage of heating fuel that hit Minnesota hard last winter, when some rural residents were unable to refill their tanks, has pushed propane suppliers to make big changes.

Companies that deliver propane say they have taken steps to guard against a repeat event this winter.

At the Working for Farmers’ Success in southern Minnesota, that means some new 30,000-gallon propane storage tanks. 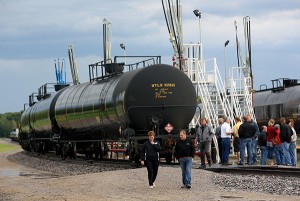 Rockville Propane Terminal clients and colleagues tour the rail operation in St. Cloud Sept. 3. The expanded terminal includes 16 tanks with the storage capacity of 620,000 gallons, and the facility has the ability to unload 10 railcars every 4 1/2 hours. CHS Inc. and Wenner Gas partnered in the expansion of the terminal. – Jeffrey Thompson/MPR News

The new capacity will help keep farmers supplied when they start drying corn during the fall harvest. It also will help meet home owner demand when the heating season starts. In all, Minnesota consumers use about 500 million gallons a year. At WFS, Cole hopes the new tanks will play a small role in helping the state avoid a replay of last winter, when cold weather and heavy demand overwhelmed propane supplies and caused prices to more than triple.

Cole says WFS spent more than $1 million to buy and install 10 of the big tanks across its 100-mile-wide service area. He said the co-op’s customers also heard the wake-up call. More than 150 of them put in additional propane storage tanks this year. But more needs to be done.

“We’ve been pounding it in their heads here for the last year, you guys got to increase your storage, you go to do some better storage,” Cole said. “A lot of them have, a lot of them haven’t.”

Cole said the extra storage helps, but it’s still unclear whether there will be enough propane to fill those added tanks. He wonders if railroads will be able to keep up with propane demand.

With farmers complaining loudly about delays in shipping grain by rail, the question is whether propane will face similar problems. Supplies of the fuel fell short last year in Minnesota when heavy grain drying demand in the fall was followed by a brutally cold winter and the infamous “polar vortex.”

With a record harvest expected this year, agricultural demand for propane could be heavy again.

“The United States is producing more propane today than we ever have,” Sloan said.

With a strong supply, the extra storage available in Minnesota this year will help should the state see the combination of demand increases that occurred last season, he said.

But getting supply to those tanks is harder now as the distribution system lost a major propane supply pipeline. The Cochin Pipeline, which provided access to major propane storage fields in Alberta, Canada, and delivered about 40 percent of Minnesota’s propane last year, has stopped shipping propane to the United States,

Instead, it is sending to Canada condensate, a U.S. oil product used to thin Canadian tar sand oil and make it easier to transport.

However, Minnesota propane suppliers have taken steps to lessen the impact of the lost pipeline.

Matt Kumm, a propane marketing manager for CHS Inc., headquartered in Inver Grove Heights, said the cooperative has spent $24 million to increase storage at two central Minnesota propane terminals that take deliveries by rail, as well as ones in North Dakota and Wisconsin.

Even if Minnesota has colder than usual weather this winter, Kumm said there are hopeful signs. He said the co-op has sold its customers more storage tanks over the last few months than it did in the previous 15 years, and most of those tanks likely have been topped off.

But he said even with the new capacity, abnormally cold weather could cause problems again this winter.

“Are we going to see a polar vortex two?” Kumm asked. “We could; we don’t know.”