Some ways to discourage honeybees at the hummingbird feeder

“Everything is nearly copacetic. Some days, I don’t think I deserve to be so handsome. I’m in the pink physically and in the red financially. My shoes are a little tight, but they’ll do in the pinch. I have some geese staying under the porch at my house. They don’t make sounds like other geese. I think they are speaking porch-a-geese. My neighbor Jack is out talking to his farm fields. Jack and the beans talk. Remember back when I was the star substitute on the scrub baseball team? I was fast. I was so fast that when I hit a ball off the fence and the second baseman insulted me as I ran to second, it made me so mad that I slapped the third baseman on the catcher’s face. I was that fast. I’m good at all sports. Last fall, I borrowed a new leaf blower from a neighbor. Before I started renting it to others, I played leaf hockey against Weasel. It was after he’d sprained his wrist because he’d overloaded his cereal spoon again. I won 493,817 to 4. It’ll be closer this year. I’m going to tell Weasel that we’re playing.” 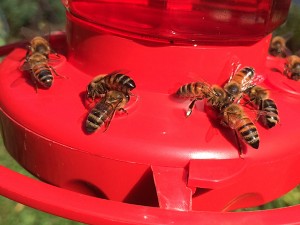 A walk in the yard is an anodyne. Spider webs sagged under heavy dew. Folklore says, “Dew on the grass, no rain will come to pass.”

Sometimes I can’t see the mushrooms for the pizza, but the fungus watching was good. Is a puffball the size of a volleyball a mushroom with a view?

Tom Jessen of Madelia wrote, “The van door was left open for a couple hours and when I hopped in to go for a ride, there was a passenger inside. It was an ovenbird. Bird was fine, perky, alert and flew away quickly with no problem. It lost a tail feather in the process.”

A customer said that he was stalked by hummingbirds as he worked in his garden. Feisty hummingbirds are the Chihuahuas of the bird world. The man was wearing a red hat. He removed the hat and his followers unfriended him. Ruby-throated hummingbirds prefer to feed on red or orange flowers. They have good color vision and can see into the ultraviolet spectrum.

Brown-headed cowbirds sometimes evict host eggs from nests that never contained cowbird eggs, presumably to force them to renest, which allow the new nests to be parasitized by cowbirds. This also penalizes hosts that rejected cowbird eggs, which prevents the evolution of host defenses that are successful against cowbirds.

Minnesota drivers face a 1-in-88 chance of hitting a deer on the state’s highways this year according to a report by State Farm. It’s estimated that Minnesota drivers will collide with 37,549 deer in 2014. Minnesota drivers have the 8th highest odds of hitting a deer among the states, according to the report, down from 6th last year. West Virginia drivers face the highest odds of hitting a deer, 1-in-39, followed by Pennsylvania, Montana, Iowa (1-in-77), and South Dakota (1-in-82). Wisconsin is 1-in-85, North Dakota 1-in-120 and Nebraska 1-in-148. Pennsylvania drivers will hit the most deer—123,941. Drivers in Hawaii face the lowest odds of striking a deer at 1-in-10,281. Minnesota drivers are more than twice as likely as the national average to hit a deer. There are 212 million licensed drivers nationwide and they struck 1.25 million deer, for 1-in-169 odds. The average cost per deer collision claim is $3,888.

The most frequent months for deer collisions in Minnesota are November and October, when hunters are afield and deer are mating, and June when fawns become active.

“Why do I see pheasants on gravel roads in early mornings?” Pheasants are on the roads early to pick up gravel or to dry off after becoming wet from rains or heavy dew.

Vic Savick of Freeborn asked what he might do to discourage bees at a hummingbird feeder. Honeybees typically come to feeders when rainfall or blooming flowers are lacking. Honeybees can be bothersome on feeders with flat feeding ports that permit their mouthparts to reach the sugar water. Feeders with bee guards help, but some hummingbirds don’t like them. If you have a saucer feeder, fill it only halfway, making the nectar out of the reach of hungry bees. Moving the feeder could work as the hummingbirds usually find it before the bees do. Bees prefer sunlit feeders, so moving one to a shady location could allow hummingbirds to feed without being bothered by bees. Put a sweet sugar water mix (three parts water, one part sugar) into a shallow plate — preferably a yellow one. Place the plate near the hummingbird feeder and hope the bees move to it. Move the plate a bit farther away each day.

A.E. Dolbear, a professor at Tufts College, noted the relationship between temperature and the rate of cricket chirps. Crickets chirp faster as temperatures rise and slower when temperatures fall. One popular formula is to count the number of chirps given in 13 seconds and add 40 to get the temperature in degrees Fahrenheit.

To bee or not to bee. Some flies mimic bees. Is it a bee or a fly? Fly antennae tend to be short and difficult to see. Bees have two sets of wings, flies have only one. When at rest, bees fold their wings into the body. Fly wings point away from the body or rest at an angle.

“Every time you smile at someone, it is an action of love, a gift to that person, a beautiful thing.” — Mother Teresa