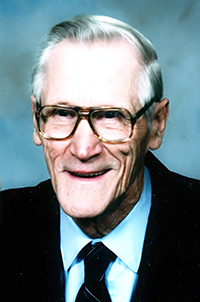 Funeral services will be at 11 a.m. Thursday at Estherville Lutheran Church in Estherville with the Revs. David Bergstrom and Norman Erickson officiating. Interment will be in Walters Cemetery in Walters.

He moved to Walters at the age of 4 and attended the Walters Public School through eighth grade. On Sept. 5, 1935, he was united in marriage to Marie Soost of Wells in Albert Lea. He remained on the farm until the family moved to Estherville in 1947. He was a longtime employee of Brink Oil Co. until his retirement in 1975. Wallace was a member of Estherville Lutheran Church, Sons of Norway and Estherville Senior Citizens. During retirement he enjoyed homespun activities like visiting with his family and friends, working in the yard and feeding the birds.

Wallace was preceded in death by his parents; his wife, Marie (Soost) Haukoos; son, Marlin; nine brothers; two sisters; nine sisters-in-law; and three brothers-in-law. Memorials may be given to Gentiva Hospice in Spirit Lake, Rosewood Manor or Estherville Lutheran Church.