Aim for the perfect attire for any hunt

When it comes to hunting, sisters Ahne and Jennifer Ordalen know more than a thing or two.

They grew up pheasant hunting with their father, Edward “Cowboy” Ordalen Jr., and were also active in the father-child leagues at the Valhalla Hunting Club in Albert Lea, where they were known for out-shooting the boys. At the time the sisters were the first girls to join the club, but they said hunting is now growing in popularity with women.

These days the Ordalen girls continue to hunt on a regular basis, going on several excursions each year, most of which are in pursuit of deer, turkeys or ducks. They hope to someday also hunt antelope, elk and — in Ahne’s case only — bears.

Ahne works full time with her mother, Beth Stadheim-Ordalen, at Stadheim Jewelers in Albert Lea and is a mother, herself, to Easton, 5, and Evelyn, 3. Her partner, Tad Lunning, is an avid hunter as well. Being out in nature is an important part of her life and, to relax, she enjoys spending time with her friends, family, horses and mules. Ahne said she particularly enjoys deer hunting and that, regardless of the type of animal being hunted, she always loyally sticks with her favorite shotgun, a 20-gauge Remington.

Jennifer is an account executive at 99.9 KAUS Radio in Austin and is also a musician. She lives in Albert Lea with her cat, Tux, and Australian shepherd, Crosby. In her down time she enjoys gardening, cooking and being with animals. Jennifer is partial to duck hunting and, depending on what she is targeting, relies on a variety of guns, including a .50-caliber Thompson Center Hawken remake black-power rifle. Her favorite aspect of hunting is the adrenaline rush.

Similar looks can be found at Dunhams, Shopko and Walmart. 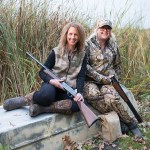 Duck hunting attire requires blending into the reeds and wetlands that hunters usually have to watch from and wait in. 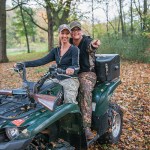 Pattern and color blending is essential for turkey hunting as turkeys have extremely keen eyesight. 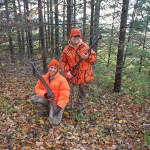 Deer hunting fashion requires patterns that help the hunter blend into their surroundings. Deer do not detect color differences, so the blaze orange hunters wear to make themselves visible to other hunters goes unnoticed.