Candidates share their positions or leanings on proposed calendar 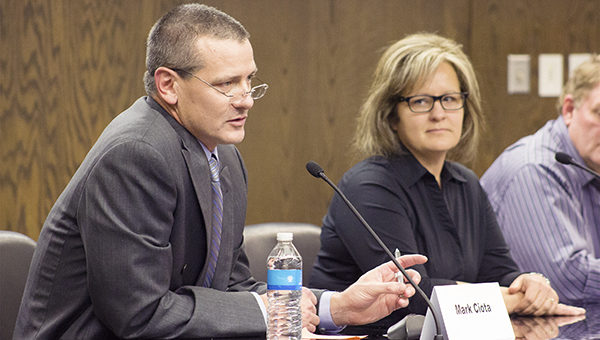 The five candidates vying for three spots on the Albert Lea school board discussed goals for student achievement during a debate Wednesday night. 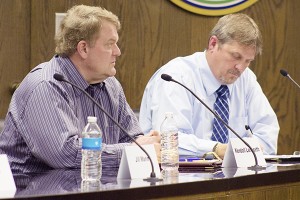 Ciota, 50, is finishing up his first term on the school board. He said he’s been a big advocate for public education his whole life, as both of his parents were teachers. He desires for Albert Lea Area Schools to be the best it can be, and realizes that it’s a lofty goal.

Marin, 51, is also an advocate of public education. She said education has always been a love of hers ever since school became a safe place when her home life wasn’t safe.

She said she’s been a life-long learner and has completed two degrees, including a master’s degree in mental health counseling. Marin, who is finishing her second term on the board, said she looks at students and families for any way she can help.

Klatt, 54, is a former teacher and high school and college football coach. He and his wife have been in Albert Lea for over 18 years. He has bachelor’s degrees in education and agriculture and a master’s degree in education.

Klatt said he’s always talked about school issues with his family and throughout his life, has done the best job he can do at something while still maintaining his personality.

Langseth, 60, thinks that quality education is critical to student success. He believes that the schools can do better, and as society and kids change, the district and board must change as well. 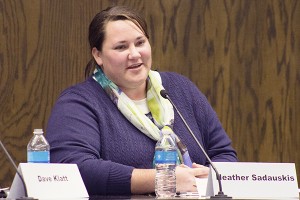 Heather Sadauskis looks to the crowd as she answers a question during the school board debate on Wednesday night at City Hall. — Hannah Dillon/Albert Lea Tribune

Langseth cited how his experiences on multiple committees have helped him learn how to make decisions. He said he won’t go along with the crowd and is a critical thinker, pulling together as many pieces as possible before making a decision.

Sadauskis, 35, was born and raised in Albert Lea, and said that the school board needs more members who currently have students in the district. All of the other candidates have children who graduated from Albert Lea schools, but Sadauskis’s two children are currently in school.

Because of this, Sadauskis said she is connected and committed to students and the schools and has an ability to see what’s going on in the school. Sadauskis said she’s also passionate about public education and is an advocate for students, families and educators.

Many of the candidates had similar positions on the issues brought up in the debate, though each candidate had different ideas for their reasoning.

Arguably one of the hottest hot button issues in Albert Lea is the proposed calendar, and the school board candidates were asked to weigh in with their opinions on the matter.

Previously undecided, Marin said she’s glad the district is looking at different options and she sees potential benefit in regard to the change, but as it stands, she said she is unable to support the calendar moving forward.

Marin said the risks of changing the calendar didn’t outweigh the benefits. She said the proposed calendar would bring hardships on some working class families and while the change might help some students, it would also remove opportunities for other students.

Ciota said he’s still undecided but is leaning in favor of the calendar. He said he needs more details. He said his final decision will come down to what programs come along with the change.

Ciota said just changing the calendar won’t allow the district to achieve its overarching goal. If there is enough detail to show what kind of curriculum changes and programs would be included with the calendar change, Ciota said he would support it. If not, he wouldn’t support it.

Langseth, Klatt and Sadauskis said that as of right now, they aren’t in support of the calendar change. Langseth said unless something extremely beneficial came forward, he wouldn’t be in favor.

Sadauskis said she’s in favor of a 45/15 calendar, but the proposed calendar isn’t balanced enough for her to be in favor of it. She believes it has a lot of potential and that it could be a good starting point, but she said her decision comes down to if it is the best for students.

Sadauskis said her decision pains her to say because she’s supportive of the school district, but ultimately decided that the calendar isn’t balanced enough for her to support it.

Langseth and Klatt also brought up that one positive of the proposed calendar they saw was the amount of public discourse it has encouraged.

All of the candidates agreed that an update to Hammer Complex was needed, as long as it doesn’t affect education in any way.

Klatt said that Hammer Complex, like the new high school building, could become something that people remember about Albert Lea. Langseth said that the complex would need a “major overhaul.”

Sadauskis said that Albert Lea is unable to host Big Nine Conference track and field competitions due to not having modern facilities.

Marin said that she’s concerned that the upgrades need to be safe and compliant and said if the upgrades are done a referendum would need to be passed so money isn’t taken away from education.

Ciota noted that for some students extra-curricular activities aren’t always extra, and that those activities give students a positive outlook on their day which helps them succeed in the classroom. He agreed that it would come down to a referendum vote so money wouldn’t be taken from education.

Board meetings on TV

Each candidate agreed that school board meetings should be televised.

Ciota said the meetings are open already, so having the meetings aired on TV or radio would make sense. He said watching or listening without being at the meeting wouldn’t allow for participation, but still believes it is a good idea.

Ciota mentioned that better facilities would be needed to broadcast the meetings, and Marin said she believes the board is in the process of moving to a new room where recording capabilities would be better.

Langseth, Klatt and Sadauskis also agreed that having the meetings broadcasted would make the information more available to the community, which would give people a chance to know what’s going on if they’re unable to make it to a meeting.

When asked about the school district’s preparedness in the event of an active shooter situation, the candidates all agreed that the school’s security has been amped up in recent years.

Ciota said that the district is going through ongoing education to learn about the best ways to deal with an active shooter, but said that ultimately if a shooter wants to find a way in, they will find a way in.

However, Ciota said that the schools have upgraded security measures to combat this, though he urged that the district doesn’t want to make school a prison.

Marin brought up that she wants to make sure students are safe in their mental health and that children aren’t feeling isolated or bullied.

Langseth said the schools do regular lockdown and evacuation drills to prepare students in case of an emergency, but he said he’s glad the board is making sure to stay on top of the continually changing information and best practices when it comes to active shooter situations.

Klatt stressed that plans are important but so is the ability to adapt to a plan. Sadauskis said it’s important to know the dangers but to also make school welcoming for students, community and families.

A few questions asked were related to student success, such as questions about the graduation rate, non-English speaking students, the new ACT requirement and other ideas besides the calendar change, such as reducing class sizes.

The candidates all had similar ideas in regards to these questions.

All of the candidates agreed that the graduation rate was low, that more should be done to accommodate non-English speaking students, that the new ACT requirement isn’t necessary and that smaller class sizes would be beneficial to students.

Ciota said that the district has been working to raise the graduation rate with things like changing the need to take final exams, revised attendance policies, different curriculum and targeted services.

Marin and Klatt said that family support is crucial to students, and that engaging families in their child’s education is something that should be worked on.

Sadauskis said that making kids feel comfortable and accomplished will help show them how important education and graduation really is.

Ciota and Marin said that the district is reaching out the best it can to students from non-English speaking families, but finances and resources are limited.

Klatt agreed that the finances are limited but said it’s important to do all that’s possible to help these students, as the city’s population of non-English speakers will continue to grow.

Ciota said the new ACT requirement is a “horrible idea.” He said the time spent teaching towards the ACT bothers him because not all students plan on going to college, and the other candidates agreed.

Marin said that forcing students to take the ACT puts unneeded strain on them; Langseth said the ACT isn’t needed for all students because it isn’t a high school evaluation but a college entrance exam; Klatt said the ACT isn’t a “one test fits all” exam; Sadauskis said the more tests kids have to take, the less significant they become.

Likewise, all of the candidates agreed that lowering class sizes would help students succeed.

Marin said some of the ideas she’s interested in besides the proposed calendar to reach the board’s aims are a volunteer coordinator to help community members find volunteer positions in the school and an assistant to help teachers with behavior issues so the teacher can continue with the lesson.

Ciota said his big focus is early childhood education and educational tracks — college, technical and unsure tracks for students who know, or don’t know, what they’re going to do after high school.

Langseth and Klatt said that increasing programs for gifted students who move at a faster pace will help. Klatt said he’d also like to see heightened morale with students, teachers and staff, and in that environment students will achieve more.

Sadauskis said in her research, she found that Minnesota has the third largest class sizes in the United States and lowering class sizes would really help student success.