Meaghan Christian and Juan Cazares-Gonzalez, both of Rochester, were married at 1 p.m. June 3, 2014, at Plummer House in Rochester in a double ring ceremony. A reception followed at 6 p.m. at Doubletree in Rochester. 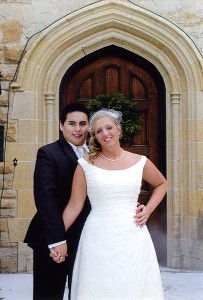 Juan is the son of Juan Cazares-Quebedo and Maria Gonzalez-Cruz of Albert Lea.

The bride is a 2008 Albert Lea High School graduate and a 2010 Mayo School of Health Science graduate. She is employed at Mayo Clinic Health System of Rochester.

The groom is a 2009 Albert Lea High School graduate and is a nursing student at Winona State University.

The maid of honor was Leah Olsen, friend of the bride, of Hugo. Bridesmaids were Brianna Brandt and Allison Abrego, friends of the bride, both of Albert Lea.

The flower girl was Guadalupe Cazares-Gonzalez, sister of the groom, of Albert Lea.

The ring bearer was Lane Becker, nephew of the bride.

The officiant was Kathy Diedrich.

A wedding trip was taken to Puerto Vallarta, Mexico, and the couple will live in Rochester.