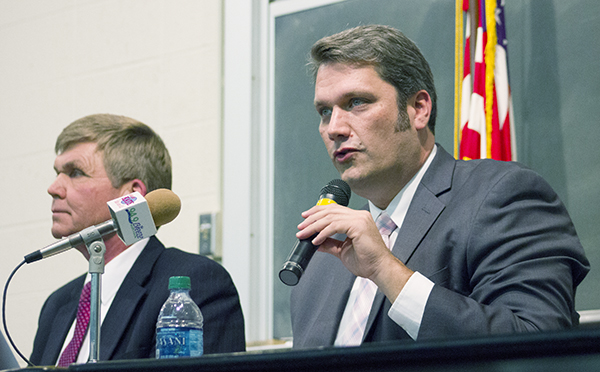 Should County seat have more pull on board?

Erdman, 61, who sells office products and office furniture for a living, highlighted his experience as 2nd Ward councilor from 2003 through 2007 and as Albert Lea mayor from 2007 through 2009.

He said he can bring this history and knowledge of the city to the board if elected.

“Albert Lea is the engine that drives the county, and we need to feed that engine,” Erdman said.

Some of his priorities going into the term are the Stables project, eliminating flooding on East Main Street and encouraging closer supervision for the Shell Rock River Watershed District.

He said one of the biggest challenges facing the county in the next 10 years is reversing the trend of population loss in the area.

“We need to grow this town and grow this community,” he said, noting that the population has decreased about 5 percent since the 2000 Census.

Shoff, 40, a chiropractor, has been in practice since 2002 and was first elected to office in 2006. He said he has served on transportation committees on state and federal levels and has been involved with lobbying on the state level.

He said some of the highlights during his term have been the selection of Albert Lea for the Veterans Affairs community-based outpatient clinic, the federal Immigration and Custom Enforcement contract for the county’s jail, the hiring of a full-time emergency management director, reducing staff through attrition and seeing the county board meetings be televised.

He said the biggest challenge facing the county in the next 10 years is being able to meet state and federal mandates. He estimated about 90 percent of county services are mandated from the state and federal government.

The following is a summary of the issues discussed during the debate:

Reasons for running for office

Shoff said he initially ran for office in 2006 because he saw a need to grow the community, particularly with the younger generation.

In recent years he said he has been impressed to see how many of his classmates have gone away to school and come back to the community.

Erdman said he is running to be the 4th District commissioner because he thinks he can bring some balance to the county board in representing Albert Lea residents.

He said he thought his previous experience in local government would be beneficial in the seat.

One question asked the candidates whether they supported the commissioner pay and whether they would choose to implement a per diem pay rate.

Shoff said of the 87 counties in the state, Freeborn County is the only one that doesn’t have a per diem rate. He noted that in his time in office, the commissioners have had the same pay seven out of the eight years.

Erdman said he thinks a per diem rate is probably not appropriate and noted he is not running to be compensated.

“The compensation they receive right now is more than fair,” he said.

Both candidates agreed that county board meetings at 8:30 a.m. on Tuesdays were probably not the best time for residents.

Erdman said he thinks the meetings should be held in the evenings and all four local government bodies should use the Albert Lea City Council Chambers, where there is a higher quality camera system and more people could watch the proceedings.

Shoff said at one point he had brought up the idea of having night meetings and noted the county is close to having its meetings shown live online.

One question asked the candidates talked about the collaboration between the city of Albert Lea and the county for law enforcement dispatch services and asked what other areas the city and county could collaborate on.

Shoff said it seems as if everyone talks about increasing county and city collaboration as a campaign point, but he pointed to the collaboration he has seen in the last eight years.

He said the county’s information technology department leads not only the county’s IT but also the city’s. He also pointed to consideration of having the county administrator lead both the county and city and the $4.5 million ARMER radio project, of which $1.5 million supported radios for Albert Lea law enforcement.

Another question asked the candidates what they plan to do to support downtown Albert Lea.

Erdman said when he was on the City Council he helped create the Broadway Ridge Renewal Fund, which initially was a loan program for business owners interested in renovating the fronts of their buildings. The program later turned into a grant program.

He pointed out that the county commissioners have shown some support for that but probably could show more support in the future. He pointed out the investment the county has made in downtown Albert Lea with the Freeborn County Courthouse and that about 4,000 people work in the downtown.

Shoff said the county has supported the Broadway Ridge program and said he thinks that as it is used more, it will be funded more.

“Certainly as a commissioner and a business owner downtown, I’m looking forward to the continued development in downtown Albert Lea,” Shoff said.

• Support for $500 stipends to help recruit emergency responders in Freeborn County. This was in reference to a bill by District 27A Rep. Shannon Savick passed in the last legislative session that included Freeborn County as part of a pilot program.

• Support of county funding for the Albert Lea Public Library.

• Support of a resolution to flooding problems on East Main Street in Albert Lea.

• Support of funding for the sewer issues in the Stables neighborhood.