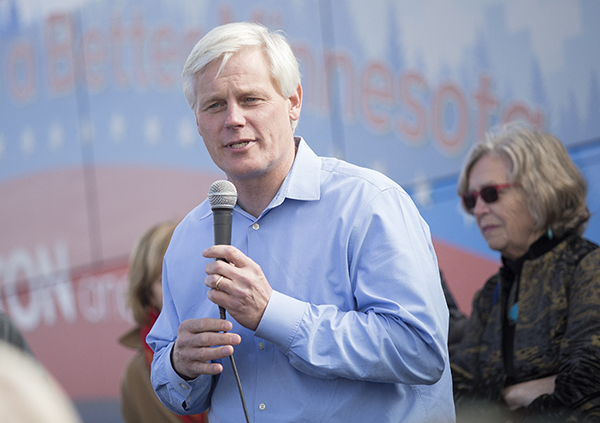 DFL candidates from across the state rallied in Albert Lea Wednesday afternoon, encouraging area residents to get out to vote in Tuesday’s general election.

Standing on risers in front of a bus in the Union Center’s parking lot, they asked a crowd of at least 75 people to get involved in the final days before the election and to spread their message to their friends. 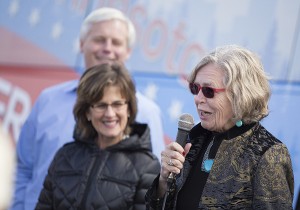 “When Minnesotans show up we win,” said Speaker of the House Paul Thissen of Minneapolis. “When we don’t show up,  we don’t win.”

The statewide bus tour started Wednesday morning at the Minnesota Capitol and throughout the day went to Mankato, Albert Lea, Rochester and Winona. From Wednesday through Monday, the tour is slated to make between three and seven stops a day in cities across the state. 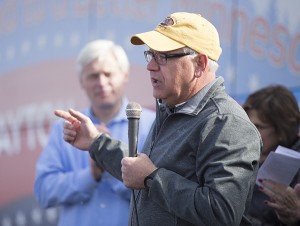 Thissen highlighted some of the successes in the last legislative session, including narrowing the gap in education funding for rural schools, freezing college tuition and cutting property taxes.

He said the DFL agenda for the next session is good for all of the state.

Martin talked about funding for all-day kindergarten, raising the minimum wage, the passage of the women’s economic security act and having one of the lowest unemployment rates in the nation.

“We’re just scratching the service on what we’re able to do,” he said.

Several of the candidates referenced former House Rep. Henry Kalis of Albert Lea, who was in the audience, as a dedicated leader in the Legislature. Kalis served from 1975 through 2002. 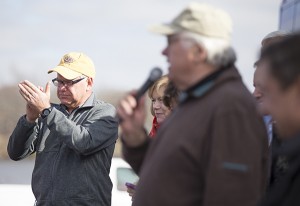 Several also lobbied for Savick, of Wells, who will face off against Bennett, R-Albert Lea, and Tom Price, IP-Alden. Thissen last week in a visit to Albert Lea with Gov. Mark Dayton said the district is one of probably eight to 10 across the state that could turn the majority in the House.

He called Savick a “real leader” for long-term care.

Savick, herself, acknowledged how tight the District 27A race is and asked for help from the crowd.

“There’s unfinished business,  and I need to finish it,” she said.

Simon touted the new law that allows no-excuse absentee voting, which he helped author. He said the top function of the Secretary of State’s Office is to protect,  preserve  and strengthen the right to vote.

Walz,  of Mankato,  who is running against Republican Jim Hagedorn of Blue Earth,  talked of job growth and reducing the cost of government by encouraging a living wage.

He asked if the state is going in a direction to provide opportunities for all of its children.

Many members of the crowd held signs with the candidates’ names on them and cheered throughout the rally.