Disc golf and the art of Moore 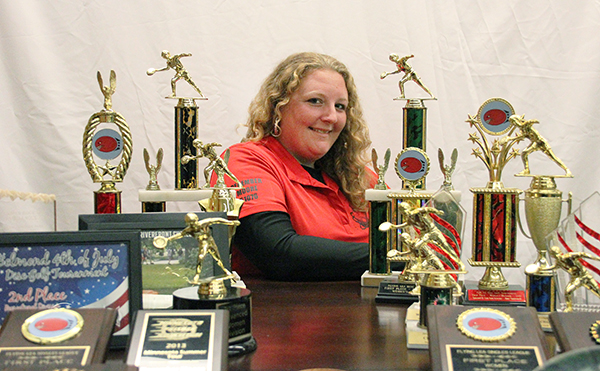 What started as a teenage pastime has turned into a lifelong sport for Albert Lea disc golfer December Moore.

These days, in her home on Washington Avenue, she has more tournament titles than she can recall, something between 20 and 30. Plus there are all the leagues, points races, doubles competitions and other events from which she has brought home hardware. She is considered among the best female disc golfers in the state.

In 2003, when she was in high school, Moore’s brother, Deric, was into the sport and spread it to her. She started playing disc golf without even keeping score and using a single disc, a Quest T-bone, at a nine-hole disc golf course on the island at Bancroft Bay Park.

An 18-hole course was built at the mainland portion of the park in 2008, and a league formed in 2009. Deric joined the league, but December didn’t venture out until 2010. As part of joining, she received what players were calling a “Nancy,” an Innova Aviar putter donated to local disc golfers by Nancy VanderWaerdt State Farm Insurance and Martin’s Cycling & Fitness.

There are by far more guys playing disc golf than girls, so finding competition at times was difficult. Still, by 2011, she decided to participate in an unsanctioned tournament in Belmond, Iowa, knowing there would be competitors. Moore won.

Since then, with putting as her strength, Moore has several sanctioned and unsanctioned titles to her name. She is on the Mider Cup team for southern Minnesota for the third straight year. (Think like Ryder Cup in golf but for Minnesota, hence, Mider.) And she placed 17th out of 32 women in the sport’s world amateur championship last summer in the Twin Cities. And she has played about 60 courses throughout Minnesota, Iowa and Wisconsin.

She likes to play for the fresh air, exercise and nature. The 29-year-old is a mother and is attending college to become a teacher. She often can be found playing beside her boyfriend, John Lerum. They met playing at local leagues.