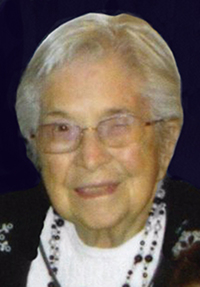 Dorothy Ann Bennett, 93, passed away peacefully Thursday, Oct. 9, 2014, at Thorne Crest Retirement Community in Albert Lea. Dorothy was born to John and Matilda (Sable) Diedrick on March 1, 1921, in Albert Lea. She had been a lifelong resident of Albert Lea, graduating from Albert Lea High School. She was an active member at St. Theodore’s Catholic Church.

On Feb. 15, 1941, Dorothy married Walter M. Bennett in Albert Lea. Together they raised five children. Dorothy was a homemaker who spent her free time sewing, crocheting and playing cards. She was the kind of lady people gravitated toward because she always had a sympathetic ear, willing to listen.