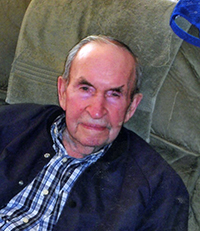 John William Badje passed away peacefully surrounded by family at Good Samaritan Society of Albert Lea Wednesday, Oct. 15, 2014. He was 90.

John was united in marriage to Arelly Scarff on Sept. 11, 1946. They celebrated 68 wonderful years together. They were blessed with three daughters, Jan, Karen and Tammy. They were raised on the farm in rural Thompson, Iowa.

John loved his family and worked hard his entire life. He farmed until 1984. Then they moved to Albert Lea where he mowed lawns and worked as a janitor at the Eagles. He loved animals and spending time with his Eagles family. He was loved by all — his smile and laugh were contagious. John and Arelly loved to dance. He loved to visit and make new friends. He touched many hearts and has left a huge void.

John is preceded in death by his parents John and Lena; sisters Jennie Swalve and Josie Head; brother, Lawrence Badje; great-granddaughter, Savannah Manley; as well as brothers-in-law and sisters-in-law.