McFadden completes his tour of 87 counties 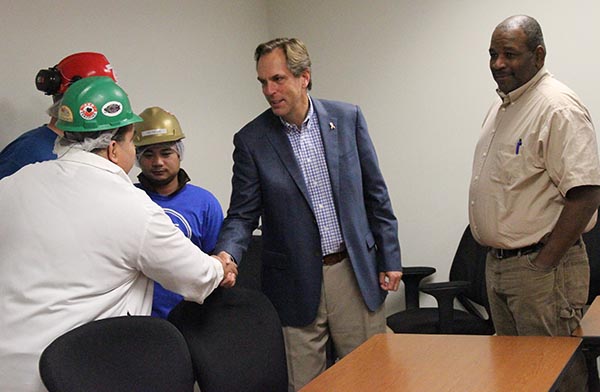 In his campaign to be a U.S. senator, Twin Cities businessman Mike McFadden has visited all 87 counties in Minnesota, which he notes is the 12th largest state in the union.

As for his opponent, incumbent Sen. Al Franken, McFadden said he gets the impression Franken hasn’t visited all 87 counties in the past six years of office, based on the answers he has given in recent debates on the matter.

In a pickup painted with American flags, McFadden arrived at Albert Lea Select Foods on Friday, toured the meat-processing facility and spoke with employees.

In his tour of the state, McFadden noticed a few things, he said:

• Minnesotans say the country is headed in the wrong direction under President Barack Obama.

“We need to get back on the path to prosperity,” he said.

He said his plan calls for funding education, developing an energy policy and getting effective government. He said low-cost energy will bolster the manufacturing sector and bring more good-paying jobs back to America.

“We’ve come to expect mediocrity from government, but we don’t expect it anywhere else,” McFadden said. “I’d like to change that. I think we should be doing so much better.”

The Sunfish Lake native outlined his Contract with Minnesota, where he pledged to be more accessible to Minnesotans and not vote with any party or president “97 percent of the time.”

The contract states that he would push for a bill that requires Congress to pass a budget in order to receive pay.

Some other points of his contract. McFadden:

Supports the Keystone pipeline and other pipeline projects.

Reform the health care system. He said he would repeal the Affordable Care Act and replace it with an improved system. He wouldn’t favor going back to how health care was prior to the ACA.

McFadden said he supports the Renewable Fuel Standard and bashed Franken for failing to get a seat on the Senate Agriculture Committee, as he promised six years ago. He also noted how long it took Congress to pass a farm bill.

McFadden also said he opposes the Environmental Protection Agency’s desire to rewrite regulations to give it power over surface water, rather than merely navigable waters. Presently, the states control rules for surface water.

Contacted this morning, the Franken campaign said the Ag Committee had been filled up by the time Franken was sworn in as a senator. He wasn’t sworn in until July 2008 after an eight-month political battle was over. Most senators take the oath to begin their terms in January.

The campaign said Franken fought hard for a five-year farm bill and co-wrote the energy section of the bill to support ag-based renewable fuel.

As for the charge of not visiting the 87 counties of Minnesota, the Franken campaign said he indeed has visited them.

“He has held 1,300 official meetings and is constantly crosscrossing the state,” a campaign staff member replied.