Funeral services for Ralph H. Peterson of Albert Lea will be at 10 a.m. Saturday at First Lutheran Church in Albert Lea. The Rev. John Holt will officiate. Visitation will be from 5 to 7 p.m. Friday at Bonnerup Funeral Service and one hour prior to the service at the church. Interment will be in Hillcrest Cemetery. 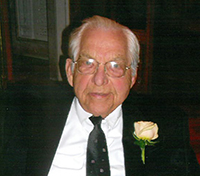 Ralph Peterson was born Aug. 26, 1922, in Hunter, N.D., the third son of Henry and Ella Peterson. Life was challenging for his family of nine during the Depression. But through his father’s many job changes, subsequent family relocations, a house fire where everything was lost and a school year missed because of pneumonia, Ralph figured out that education was the key to a better life.

So he excelled in school and was the only male in his east side St. Paul neighborhood to graduate from high school. With no financial assistance and by sheer wits and determination, Ralph went on to complete both college and law school at the University of Minnesota.

Through participation in church activities at First Lutheran Church in St. Paul, including summer Bible camp at Bay Lake, Ralph began a courtship with Marjorie Youngquist. They were married Sept. 25, 1948, and Marjorie moved to Albert Lea, where they began their lives together a year or so after he joined the Meighen, Knudsen law firm which eventually became Christian & Peterson in 1991.

Four daughters were born to Ralph and Marjorie, Charlotte, Patricia “Patti,” Carol and Anita. Ralph was a great role model for his daughters and grandchildren, setting the bar high for education, lifelong learning and community service.

Throughout his distinguished career practicing law, Ralph gave back to the community through membership on numerous boards and committees, most notably as one of the founders of Lea College in Albert Lea and president of its board of trustees and the establishment of Albert Lea Vocational Technical College in Albert Lea. He was also a charter member of Jobs Inc., and Albert Lea Industrial Development Corporation. Before Shoreland Heights was part of the city of Albert Lea, Ralph served as its township supervisor and constable and later became president of Shorelands Inc. He also chaired the Freeborn County Republican Party and was a 50-plus year member of Rotary, past-president and Paul Harris fellow.

In the 1950s Ralph was the attorney for Wilson & Co. during the strike, where he was at great personal risk before the governor declared martial law and called in the National Guard. He was a devoted and progressive member of First Lutheran Church in Albert Lea where he started the Peace and Power program with Bob Bonnerup in 1979. When funds were low Ralph would kick in whatever was needed to ensure it was available for television viewers.

On a state level Ralph also learned great esteem from colleagues, as evidenced by his election to president of the Minnesota State Bar Association, president of the State Board of Education and as a member of the Luther Northwestern Seminary board and the Governor’s Labor Relations board.

Ralph became a pilot in the early 1960s and enjoyed flying a small Cessna airplane with fellow Cloudchasers to flight breakfasts around the state. He was also a big Minnesota Vikings fan and exercise proponent, walking to work and back daily before it was fashionable. Primary to Ralph was his family, his faith, education, his profession, his community and travel. He had an immense pride for his children, grandchildren and great-grandchildren. He and Marjorie were totally devoted to each other, with never a cross word between them. Together they traveled through five continents and enjoyed the bulk of their time with church, family and friends. Later in life he found comfort in just sitting in their porch, looking out at the lake. And he never stopped learning nor rested on his laurels. While in his 70s, Ralph completed a two-year vocational degree in computers and audited humanities and ethics classes because education was also the key to staying mentally alert and he was determined to keep up, to be challenged and to learn.

Ralph seemed a man who had beaten the odds until Alzheimer’s Disease stacked the deck against him. But unlike most with Alzheimer’s Disease, he was happy, gracious and grateful — always smiling and thanking anyone around him for patting his arm or clearing his dinner plate or for just being there. And despite the insidious disease, his smile — his endearing and enduring smile — comforted his family to the end.

Ralph Peterson left his imprint on this earth with a life well lived. He both modeled and encouraged personal growth and achievement, strong faith, community service, commitment, loyalty and a sense of pride in family and things well done. He has finally been released from the bonds of Alzheimer’s Disease to become whole again with his father in heaven.

Memorials are preferred to the Ralph H. Peterson Scholarship Fund at Riverland Community College or to Peace and Power at First Lutheran Church in Albert Lea.