Funeral services for Travis O. Haakenson will be at 10 a.m. Tuesday at Our Saviors Lutheran Church in Lyle. The Rev. Barbara Finley-Shea will officiate. Visitation will be from 5 to 7 p.m. today at Bonnerup Funeral Chapel in Albert Lea and again one hour prior to the service at the church. Interment will take place at Woodbury Cemetery in Lyle. Online condolences may be made at www.bonnerupfuneralservice.com. 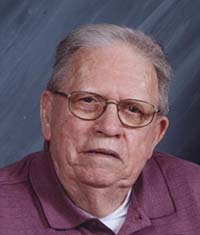 Travis Haakenson was born July 12, 1927, to Olaf and Berthilda (Thoreson) in Montevideo. Travis graduated high school from Madison. After graduation, he enlisted to serve in the United States Navy. He served for two years until his honorable discharge. After the military, Travis went to Brookings, S.D., to obtain a college degree in civil engineering.

Travis was united in marriage to Lila (Montanye) on May 14, 1972, at the Little Brown Church in Nashua, Iowa. To this union three children were born. The couple called Lyle their home. In 1971 Travis was employed with Jones & Haugh in Albert Lea. He then began working for Mower County in the sanitation department and later the highway department. Travis also helped to run the grocery store in Lyle that his family owned.

Travis is preceded in death by his parents and his son, Andy.

Memorials are preferred to the Lions Eye Bank or donor’s choice.