Use of the civic theater expands to opera, ballet screenings 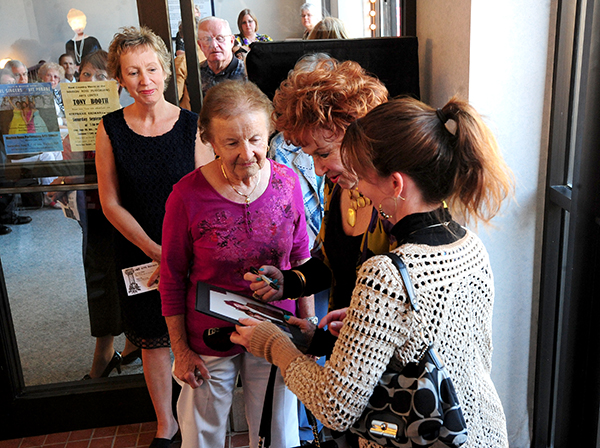 A woman has Marion Ross autograph a photo the two took together when she was a young girl. — Brandi Hagen/Albert Lea Tribune

Named after the actress playing Mrs. Cunningham on “Happy Days,” the Marion Ross Performing Arts Center has been in existence for more than 100 years in downtown Albert Lea.

It comes in at No. 11 in the Tribune’s countdown of 25 favorite places of Albert Leans.

Presently, it showcases everything from community theater plays to live high-definition broadcasts of the Metropolitan Opera in New York City, to the National Theatre Live in London and the Bolshoi Ballet in Moscow, along with comedians, country shows and magic shows.

The performing arts center is also the meeting place of Hope Church on Sundays.

Former Albert Lea Mayor Randy Erdman, who volunteers for the Albert Lea Community Theatre, said events have drawn in people from outside of the area and even outside of the state. City leaders have said the theater has contributed to the revitalization of downtown Albert Lea.

Before becoming the entertainment venue it is known for today, the building served as an emergency hospital during a flu epidemic in 1920, a roller skating rink in the 1940s and a youth center in the late 1960s, said Linda Evanson, librarian at the Freeborn County Historical Museum. Albert Lea’s Western Star Lodge No. 26 has been in the upper floor of the building since the start.

Erdman said the city purchased the building in 1980 and remodeled it into a theater. He noted former City Manager Paul Sparks was instrumental in the acquisition.

In 2008, city officials renamed the building from the Albert Lea Civic Theatre to the Marion Ross Performing Arts Center, in honor of actress Marion Ross, who lived in Albert Lea as a child. In addition to her time on “Happy Days,” Ross has received much recognition for her Broadway and national tour of “Arsenic and Old Lace” and national tour of “Steel Magnolias.” She has acted on the television series “Brooklyn Bridge,” “Touched by an Angel,” “The Drew Carey Show” and “Gilmore Girls,” to name a few.

Former theater Manager Patrick Rasmussen and Jim Pilgrim of KQPR Power 96 came up with the idea for the name change, Erdman said, and Ross herself came to town for the dedication.

In 2012, Albert Lea Community Theatre took over the management of the building as the city faced budget cuts.

Since then, the number of ticketed events each year at the theater has grown.

The theater seats 250 people and has a fully equipped lighting and sound system. In the basement is another room that can accommodate 185 people.