Bailey Vento and Jarrad Knutson, both of Mesa, Ariz., were married at 4:30 p.m. Aug. 30, 2014, at Villa Siena in Gilbert, Ariz., in a double ring ceremony. The ceremony was officiated by Matt Nathanson. A reception followed at 6 p.m. at Villa Siena. 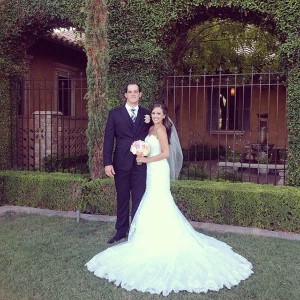 Bailey is the daughter of Rocco and Shelly Vento of Germantown, Wis., and is the granddaughter of Patricia Lake of Port Washington, Wis., Pauline Enea of Milwaukee, Dave Lake of Henderson, Nev., and the late Ron Vento of Milwaukee.

The bride grew up in Germantown, went to Germantown High School, graduated from University of Wisconsin, Stout University and is now employed as a corporate event planner with Southwest Conference Planners.

The groom grew up in Glenville, went to Glenville High School, graduated from University of Wisconsin, Stout University and is now employed as a financial adviser at First Financial.

Twins of honor were Carley and Kaila Vento of Germantown. Bridesmaids were Ashley Matuke of Richfield, Cassie Gerlach of Minneapolis, Katie O’Rourke of Germantown, Brittany Sauer of Germantown and Erin Hook of Mesa.

Guitarist was Daniel Tekunoff. A wedding trip was taken Sept. 1 to Kauai, Hawaii.