Memorial services for Winston Charles Hamersly, 89, of Gordonsville will be at 10:30 a.m. Saturday at United Methodist Church in Albert Lea. The Rev. Tom Biatek will officiate. Military honors will be accorded by members of the American Legion and VFW Honor Guards. Visitation will be from 4 to 7 p.m. Friday at Bayview/Freeborn Funeral Home and one hour prior to the service at the church on Saturday. Online condolences are welcome at www.bayviewfuneral.com. 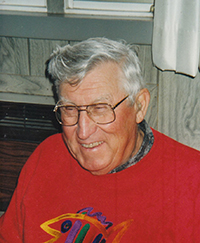 Winston Charles Hamersly was born July 24, 1925, in Charles City, Iowa, the son of Grover and Mary (Buchanan) Hamersly. He spent the first six years living in Postville, Iowa, and then moved with his family to the Gordonsville area where he lived the rest of his life. Winston attended rural school and graduated from Northwood High School and Cornell College in Mt. Vernon, Iowa. Winston served in the U.S. Navy in Dublin, Ga.

On March 8, 1952, he was united in marriage to Marjory Luett in Freeport, Ill. Winston farmed and was a part-time rural mail carrier. He was a member of United Methodist Church. Winston was a private pilot and enjoyed music, travelling and collecting stamps. He volunteered on the church board, for the Farm Bureau and for over 40 years with the Shellrock Township board. He loved flying, reading and spending time with family and friends. Blessed be his memory.

Winston was preceded in death by his parents and his brother, Millard.

Memorials are suggested to United Methodist Church in Albert Lea, the American Legion and VFW Honor Guard in Albert Lea or the charity of your choice.