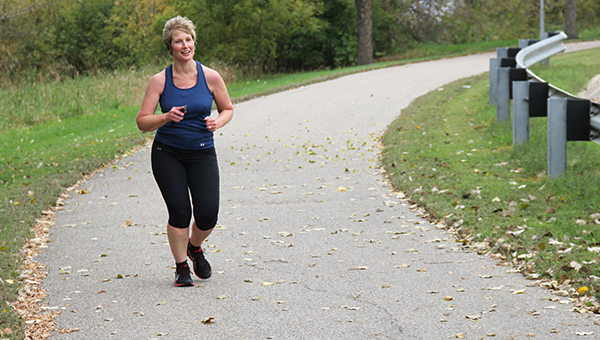 Jessica Berke, who resides in Austin and works in Albert Lea, jogs Tuesday on the Blazing Star Trail near the junction of Garfield Avenue and Front Street. – Tim Engstrom/Albert Lea Tribune

Aside from Fountain Lake, the Blazing Star Trail is arguably one of the most popular places to walk, bike and run in Albert Lea.

The paved trail, which starts at Frank Hall Park and runs about six miles through rural landscapes to Myre-Big Island State Park, comes in at No. 12 in the Tribune’s countdown of 25 favorite places of Albert Leans.

In addition to offering a place to exercise, the Blazing Star Trail offers a diversity of environments for nature lovers including wetlands, oak savanna, big woods and prairie, along with the wildlife that accompany each. The trail is used in the winter by cross country skiers.

The paved trail stops inside the state park at a gravel maintenance road, but trek down that road and riders discover the pavement resumes briefly near Albert Lea Lake for the sake of a bike bridge over the Canadian Pacific Railroad.

The trail eventually is planned to cross the Albert Lea Lake adjacent to a Canadian Pacific Railroad bridge, then go through Hayward and extend to Austin to connect with the Shooting Star Trail.

The Legislature first authorized the existence of the trail in 1996. Funding came in 1998, and it took five years until land deals were done so the trail could be built into Myre-Big Island State Park. Around the same time, the city of Hayward built a restroom in anticipation of the trail’s extension to this community.

In 2005, the state Legislature authorized $1.47 million in the bonding bill to extend the trail from the state park to Hayward. That funding had a five-year spending deadline, but during the 2010 legislative session, a law passed extending the deadline to June 2014.

This past spring, legislators approved an additional $433,000 for the project.

Joel Wagar, area parks and trails supervisor with the Minnesota Department of Natural Resources, said a contractor is scheduled to begin work after the harvest season this fall.

The contractor would construct the last two miles of the extension — starting in Hayward and going west to near Albert Lea Lake — while additional funding will still be necessary to connect the trail with a bridge over Albert Lea Lake.

Wagar said the state is looking into other funding options available to the DNR for this stretch, but the two miles of trail should be completed by mid-August 2015.

He said no specific route has been selected to extend the trail from Hayward to Austin, but he said there is a meeting scheduled later this month to discuss this aspect.

Once the trail reaches Austin, it would be about 20 miles long. A long-term goal is giving bicyclists the ability to ride from Albert Lea to the Mississippi River.