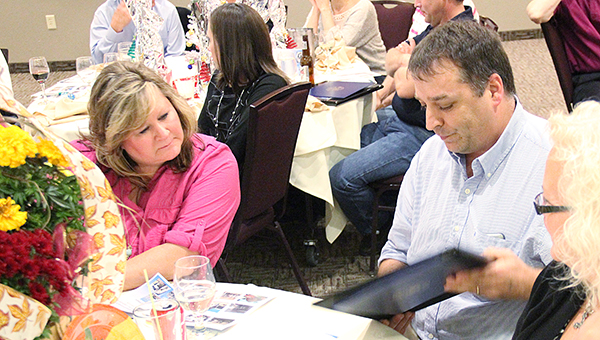 The company was named Large Business of the Year as a “poster child for job growth, ” said Chamber of Commerce Executive Director Randy Kehr.

Kehr pointed to the customer service at both Freeborn Lumber and Thompson Electric. 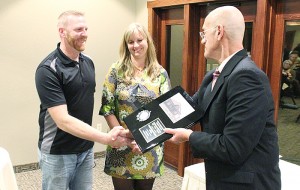 The celebration took place at Wedgewood Cove Golf Club. Kehr said it was the largest number of tables they had at the annual gathering.

The evening’s speaker was Mark Lanterman, a computer forensic scientist for law enforcement, who had the room hanging on his comments about Internet credit card breaches. He demonstrated how easy it is for hackers to gain access to thousands of credits in Albert Lea alone. He said new technologies such as Apple Pay could put a dagger in the credit card industry.

Kehr said Zumbro River Brand, which is an agglomeration, blending and dry foods packaging company, started in Albert Lea in 2006 in the north industrial park in a 20,000-square-foot building. It added on 10,000 square feet when it opened and recently added another 10,000.

Its warehouse and distribution portion are in the 62,500 square feet in the Albert Lea Economic Development Agency spec building in the Jobs Industrial Park on the south end of the city.

Kehr said when Zumbro River Brand first came to Albert Lea through the Jobs Opportunity Building Zones program, it committed to creating 15 jobs. It now has more than 70.

Kehr also highlighted that the company has a tobacco-free campus and is focused on improving the community. The company is owned by Pam Sander of Rochester.

Freeborn Lumber came to Albert Lea after suffering a fire at its former location in Freeborn and has taken part in many significant projects in the community, Kehr said. 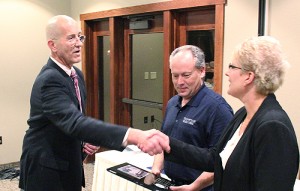 It Is involved with the American Red Cross and the Salvation Army and has quietly contributed to the Edgewater Cottage restoration and the Big Island Rendezvous.

“They don’t look for big thank yous, ” he said. “They’re committed personally and as a business to the community.” The company is owned by John Miller of Janesville.

Kehr said Freeborn Lumber stands out for its customer service. It has about 20 full-time employees.

Thompson Electric is a family-owned business with six employees and is presently owned by Mike Thompson of Albert Lea.

The company provides electrical work for both commercial and residential buildings, Kehr said, and is quick to respond to small business needs.

Gene Thompson, who owned the business prior, has been heavily involved in the Cloverleaf Lions Club, the ring toss at the Freeborn County Fair and the flight breakfast.

Other awards given out at the chamber banquet were the following:

• Ambassador of the Year to Ryan Cafourek,

vice president of Cafourek & Associates, who is on the chamber’s scholarship committee. 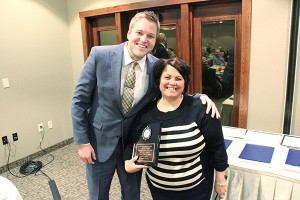 Kim Nelson of The Children’s Center poses with Jon Murray of ISC Financial Advisors during the Albert Lea-Freeborn County Chamber of Commerce banquet Thursday. Nelson was prepared to give Ambassador of the Year award to Ryan Cafourek of Cafourek & Associates, but he couldn’t be present. Murray accepted on Cafourek’s behalf and gave a facetious acceptance speech. — Tim Engstrom/Albert Lea Tribune

Kehr said Cafourek also is involved in the chamber’s golf outing and has great attendance at Ambassador and other special events.