A thanks to veterans from SCS 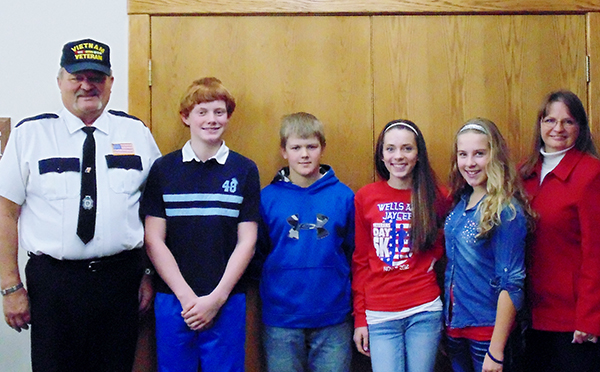 Wells Veterans of Foreign Wars member Gary Oppedal recently presented the seventh- and eighth-grade students of St. Casimir’s School in Wells the opportunity to enter a writing contest called the Patriot’s Pen. In order to participate, the students were asked to write and submit an essay titled “Why I appreciate the U.S. veterans.”

The students of the winning essays, as chosen by the Wells VFW, would have the opportunity to share their essays at the 2014 Veterans Day programs at both St. Casimir’s School and United South Central School and receive a cash prize.

The four students with the winning essays, Ben Bias (first place) and Jacob Cory, Alexis Mandler and Daylyn Huper (tie for second place), are shown in the photo above with Vietnam veteran Gary Oppedal and St. Casimir School Principal Joanne Tibodeau. The student’s winning entries included some of the following thoughts:

• Ben Bias: “The reason I appreciate America’s veterans is because they gave up so much of their lives to defend our country and other countries so that the civilians of the countries could be free to make choices that could better their lives. They sacrificed their lives so we could go to school, attend churches of our choice and live a daily life of freedom. We should all be thankful for a veteran’s service in the military. Years ago, when veterans returned from war, they were not welcomed home by big groups of people like they are now. They were treated very badly, like it was their fault that there was a war. People chose to forget about them, not caring how hard it was for them to come back home to a normal life. Veterans deserve better than to be forgotten.  You should feel honored to know a veteran.”

• Jacob Cory: “I appreciate veterans so much. I mean, why wouldn’t you? They keep our country free, and they protect people where they are fighting. Not all veterans fought, but they did a service. They might be a mechanic, engineer, cook or do some other service. It doesn’t matter what they did as they were serving us and as long as they were willing to step up and defend. You men and women are the true heroes of the United States. I am truly grateful to have such brave men and women stepping up to defend and serve our country. I respect you veterans to the moon and back!”

• Alexis Roberts: “I am proud to be an American because of all the rights we have but also because of our military. Did you know there are over 23.3 million veterans living in the U.S. today? I am very proud of the women veterans in our country, and over 1.8 million of the veterans are female. I am grateful for all the families that had to say goodbye to their mom, dad, brother, sister, daughter or son for long periods of time, not knowing if they would return healthy or even at all. I wish that everyone had a heart like a veteran, because if they did, our country would be a whole different place, a better place.”

• Daylyn Huper: “I appreciate America’s veterans because our brave people keep me and many others in our world safe. These courageous people might not know me, but they know that they need to protect me anyway! It takes a lot of strength both mentally and physically to go and fight. They have the strength to help others in foreign countries too. I am grateful for that because that makes me proud to know that they care for others too. God has given me so many reasons to be thankful for these strong, brave and courageous people that we call America’s veteran, who sacrifice time, risk their lives and protect me, my family and my country. I appreciate it, veterans!”