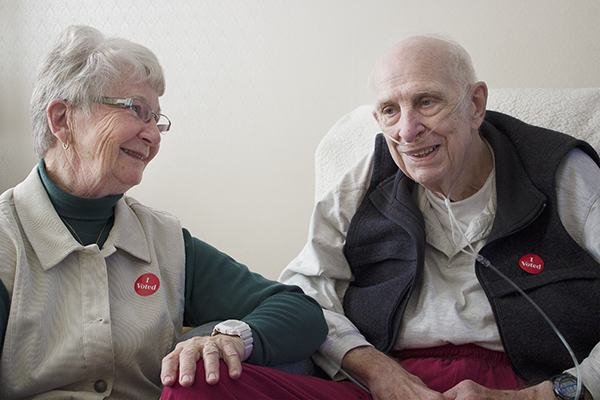 Pauline and Hugh Hall have been married for nearly 60 years. They have been involved in hospice for many years — Pauline was one of the first hospice volunteers and now Hugh is a hospice patient. – Hannah Dillon/Albert Lea Tribune

Hugh and Pauline Hall have been touched by Mayo Clinic Health System Home Health and Hospice for a good portion of their lives.

Thirty years ago, Pauline was one of the first volunteers with hospice. Her last day as a volunteer was Oct. 27.

Now, Hugh is a hospice patient. Hugh, 83, has pulmonary fibrosis and COPD, and is on oxygen full-time.

The Halls have lived in Albert Lea since 1956. After getting out of the military, Hugh went to school at the University of Minnesota before transferring to St. Cloud State University. He is originally from Winona, but as his father worked for the railroad he has lived in more than 30 states.

Hugh was the first speech therapist for the school district, Pauline said, which at that time included at least 16 schools.

The Halls thought Albert Lea would be just a stop, but they ended up staying in the city and raising their five children here.

In the early 1950s, Hugh served in the Army in Germany with an occupation force after World War II. Hugh said he felt fortunate to go that way and got to see a lot of Germany, a country he grew to love.

Because of this, he transferred to St. Cloud State University.

The Halls will be married for 60 years next August. They met at Hugh’s church in the Twin Cities before moving to Albert Lea.

Hugh also worked part-time at KATE radio for over 40 years.

When hospice was first starting out, Pauline was the secretary to the director of nursing. As she took notes at the preliminary hospice meetings and sent out information regarding hospice to businesses around town, she decided it was something she was interested in getting involved in.

One of the hurdles Pauline and hospice had to get over was explaining that hospice is a program, not a place. There used to be a space for hospice patients but it got a stigma, Pauline said. Now, hospice is a program where specialists and volunteers come to patients in their own homes.

Hospice nurses, doctors, pastors, social workers and volunteers are just some of the people that visit hospice patients. Some of the volunteers visit just for the company.

“It isn’t all medical,” Hugh said.

For the medical side, Jackie Carstens, hospice social worker, said the Hall’s Medicare Part A is covering all of their hospice services. For those who don’t have insurance, help is available.

Carstens said no one is turned away from hospice services and funding is available through the Mayo Clinic to help.

The Halls couldn’t stop saying how great the hospice program was. Pauline said if there’s any problems, someone can be to their house within hours.

Hugh was diagnosed 12 years ago, and at that time he was given one to three years to live. Nine months ago, doctors told him he had two years left to live, and Hugh hopes to prove them wrong yet again.

Hugh’s doctors said he was too old for a lung transplant, as there are younger patients that will live longer.

“I just have to outlive them,” Hugh said. “Hospice is helping me.”