“Everything is nearly copacetic. There is no whining on my yacht. Ma says the secret to happiness is to enjoy being miserable. That’s what I was when my ball flew off into the woods. I lost it.”

“Don’t let that bother you. Everybody loses a golf ball now and then,” I say. 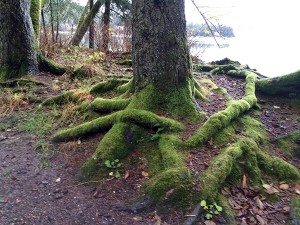 “I was bowling. It won’t happen again. You can never make the same mistake twice because the second time you make it, it’s not a mistake, it’s a lifestyle. It’s like my injured big toe. I used to dribble the bowling ball before rolling even though Bowling Elaine told me not to. Then I bounced it on my foot. It’s not a swollen big toe. It’s a message received. I had cake for breakfast today. Once you lick the frosting off, it’s a health food. Speaking of health food, my sister gave me some tofu. Giving me tofu is like putting socks on an octopus. What does your wife, She Who Must Be Obeyed, do with it?”

“She puts it in the refrigerator, looks at it for several weeks, and then throws it out,” I reply.

Joyce Carol Oates wrote, “How lovely this world is, really: one simply has to look.”

I watched three crows delighting in their torment of a young red-tailed hawk. A chipmunk with cheek pouches bulging with food for caching was working late.

Bryant McGill wrote, “One of the most sincere forms of respect is actually listening to what another has to say.”

I listen to nature. Mother Nature, if you prefer. Juncos twitter, jays cry “thief” and tree branches creak. The sound of everyday nature is my favorite music.The incredible loveliness of nature is always there, but like every work of art, is noticed only when we turn our attention in its direction.

A friend, Jim King of Juneau, Alaska, and I were talking about our favorite birds. Jim doesn’t have one. He said it would be like picking a favorite child. I tend to tell people that my favorite bird is whatever one I’m looking at, but the truth is that the chickadee of any species is my favorite. Please don’t tell the other birds.

I taught a class on birding at Gustavus. The kids were amazing. I told them about black-capped chickadees, a group of which is a banditry. I went on and on about the lives of chickadees and their amazing abilities. I might have gotten carried away in appreciation of the tiny birds. One student said to another, “Wow! I thought they were just birds.”

“Are house finches native to Minnesota?” No, the abundant house finch is a western bird species that was introduced from California into New York by the illegal pet trade in 1940. They were sold as Hollywood finches after the approximate area of their capture. When the U.S. Fish and Wildlife Service learned that federally protected birds were being sold, they intended to put a stop to the practice. Those in possession of the caged birds released them in order to escape prosecution. Those freed birds began the house finch expansion across the country and established a population in Minnesota in the 1990s, where it is now abundant.

“What does it mean when a lake turns over?” Lake turnover is the process of a lake’s water turning over from top to bottom. During the summer, the surface is the warmest as it is heated by the sun. The deepest layer of water is the coldest because sunlight doesn’t reach it. In the fall, the surface water begins to cool. As water cools, it becomes denser, causing it to sink. This dense water forces the water of the lower layer to rise, turning over the lake. The process takes varying times to complete, depending upon lake shape and depth, and air and water temperatures. During the process of turnover water clarity may decrease, decaying organic material can become suspended in the water and there could be a sulfurous odor.

“Did Ben Franklin really want the wild turkey to be our national bird instead of the bald eagle?” I give you a political answer. Not really, sort of. Henry Knox formed the fraternal Society of the Cincinnati, open only to officers who fought in the American Revolution and their descendants. George Washington was the organization’s first president general, and the bald eagle was made a symbol for its badges. In a letter to his daughter, Benjamin Franklin criticized the society and said that its symbol looked like a wild turkey, listed the turkey’s better qualities, and added that the bald eagle was a bird with bad moral character. Franklin later became an honorary member of the society.

“What is the best thing to feed birds?” Researchers from Millikin University published their findings regarding this question in the “Wildlife Society Bulletin.” They provided citizens in 38 states and three Canadian provinces with feeders and 10 types of seed commonly included in mixes. They concluded that black-oil sunflower seeds, sunflower chips and white proso millet were the best foods to attract birds.

“A Field Guide to the Birds” by Roger Tory Peterson was published in 1934.

House sparrows were brought to this country in approximately 1850. A linden moth was defoliating Manhattan Island. The city fathers hoped that the sparrows would find the moth larvae appetizing.

A group of grosbeaks are collectively known as a gross of grosbeaks. That sounds too perfect.

November is the month with the most cloud cover in Minnesota.

The American goldfinch, marsh wren and bobolink are species that have two complete molts each year.

“Flowers always make people better, happier, and more helpful; they are sunshine, food and medicine for the soul.” — Luther Burbank

“Laughter need not be cut out of anything, since it improves everything.” — James Thurber