Blue Zones is back 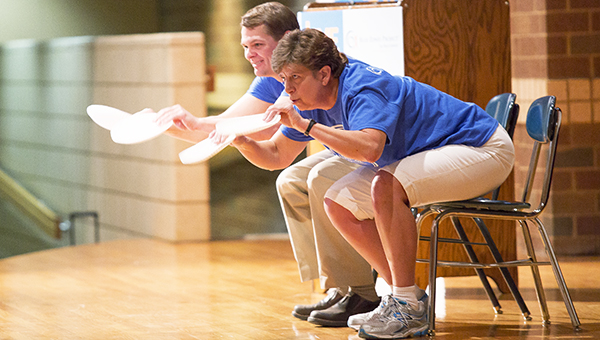 Mayor Vern Rasmussen and Lori Adams lead the crowd in “moving naturally” Wednesday at Albert Lea High School during a Blue Zones Project program. Moving naturally is the first step in the Power 9, which are nine healthy lifestyle habits the program is based upon. – Colleen Harrison/Albert Lea Tribune

Buettner: ‘It feels like coming back to a family reunion’ 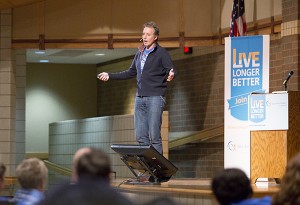 “It feels like coming back to a family reunion without the annoying Uncle Ernie,” Buettner joked at the start of his presentation to a crowd of about 350 people.

Buettner said when Blue Zones first came to Albert Lea in 2009 for a 10-month pilot project, there were 3,400 participants. By incorporating his research from areas across the country where people live the longest, residents gained about three years of life expectancy and shed 7,280 pounds. The city’s health care costs for its employees dropped by 40 percent.

But it’s what Albert Lea leaders and volunteers did after the project that he said he was particularly impressed with.

The project attracted interest from cities all across the country who wanted to do something similar in their own communities.

He teamed up with Healthways and started the Blue Zones Project and has worked in California, Iowa, Hawaii, Oregon and now Florida, implementing the same research.

They have seen similar successes.

“Over 5 million Americans are being affected by this exact same strategy,” he said.

He said the secret to longevity is not focusing only on the individual, but instead focusing on environments and cultures to making healthy choices the easy — and unavoidable — choice.

He noted when he first came to Albert Lea to present his idea, he was nervous. But he was met with optimism from many of the city’s leaders.

“What you’ve achieved is nothing short of remarkable,” Buettner said through tears. “It has enabled me to live out my dream, and I’m so very proud of you.”

Buettner’s comments were met with a standing ovation from the crowd.

Participants will be able to take part in many of the same opportunities as in the pilot project, including walking groups and purpose workshops, among others. A new initiative Buettner started is potluck moais, where residents form into groups of five to seven people and meet regularly with each other to share healthy meals and to form new friendships.

People can sign up for the project at bluezonesproject.com.

Albert Lea Mayor Vern Rasmussen said he was excited about the opportunity, and he said he looks forward to the next several months of the project.

He encouraged residents in attendance to reach out to the community and invite others to participate.

“Let’s embrace the opportunity we’ve been given,” Rasmussen said.

One participant, Clara Baerman, said she hopes to make a difference not only in her own life, but in the lives of her children and her co-workers at Cargill through what she learns from the project.

As the health services manager at Cargill, she leads the wellness committee and is striving to become a Blue Zones designated worksite.

She said so far, 30 percent of the employees have signed up for the project.

Cargill offered incentives such as walking pedometers and Fitbits to its employees that attended the event.

As a single mother of three children, she said she has struggled with her weight herself and has a full plate of responsibilities, but she is excited to grow with others in the community.

“I’m just trying to make a difference,” she said.