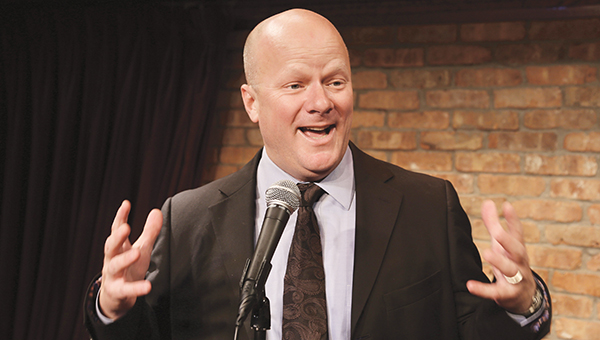 John Bush, a comedian from Minnesota, has appeared on “Late Night with Conan O’Brien,” HBO and Comedy Central. – Provided

One might call John Bush’s comedy career a boomerang.

Bush, a comedian from Minnesota, cut his teeth in Minneapolis in the early 1990s.

In 1996 he started doing comedy four nights a week at a New York City comedy club.

It isn’t that simple, of course — Bush managed to squeeze a lot of experiences during his five years in New York City.

Bush will be performing for America’s Best Value Inn’s next comedy night on Thursday. His opener will be Brian Hicks from Chicago.

When Bush was a child, he was always trying to make people laugh. He remembers running around in a dress, to which his neighbor asked his father if he was worried about his son.

Bush said he’s always done sketch comedy, doing skits for the neighborhood. He doesn’t remember a time where he wasn’t on stage.

This led to him getting involved in the Minneapolis comedy scene in the early 1990s.

Bush started out at David Wood’s Rib Tickler, which is now the Acme Comedy Club, in Minneapolis.

The club was a comedy magic club. Shows would start out with an emcee and would be followed by a touring magician, then a comedian for the headliner.

He started out as an usher and saw big names such as Dana Carvey and Kevin Nealon before they got big.

Now the club, as the Acme Comedy Club, is a major comedy club and is nationally respected, Bush said.

In 1996, Bush was invited by HBO to perform in Aspen, Colo. While he was there he met Lucian Hold, manager of the Comic Strip Live in New York City.

Hold was known as a champion of early top comics. He was featured in Chris Rock’s A&E biography, but Bush said he wasn’t a famous man, just important in the development of a lot of young comedians.

Hold offered Bush a job doing stand up four nights a week at his club, and Bush accepted the offer. His beginnings at the Comic Strip Live help him get into other clubs, and he worked the New York City comedy scene for about five years.

During this time, Bush said he was around comics like Louis C. K., Zach Galifianakis and Jim Gaffigan.

One of the funnier stories Bush remembers was when he was opening for Howie Mandel. Bush was on stage, doing his routine, when Mandel would walk behind him on stage, looking like he was searching for something.

Bush recalls the crowd would go crazy once Mandel stepped on stage, but Bush thought it was just because he’d said something amazingly funny.

While he was in New York City, Bush also got the chance to be on both the small and silver screens.

On television, he’s been featured on “Late Night with Conan O’Brien,” “HBO Comedy Showcase” and “Premium Blend” on Comedy Central. He also acted on “Law and Order: Special Victims Unit” and “Spin City.”

On the silver screen, Bush had a part in “The Thomas Crown Affair.”

He also did theater in New York City and around 2000 he acted in “Triple Espresso,” a play that started in Minneapolis but has since been performed around the world.

Now Bush has returned to the Midwest like a boomerang, but he’s happy to be here.

He lives in Des Moines and has a house, a wife, two children, a dog and a backyard — the latter of which he’d probably never get if he was actively pursuing fame.

Bush said he’s not trying to be famous. He’s not against fame, but his main goal is to be the best comedian he can be and enjoys working private and corporate parties.

If he wanted to be famous, Bush said he’d be able to put up with the traffic and high apartment prices of Los Angeles and New York City, but he’s content with living in Des Moines.

Bush said it’s a tough concept for most people to wrap their brains around: a comedian who doesn’t want fame.

“I’m not trying to be a famous guy,” he said. “I’m doing it because I love stand-up comedy.”

Carrie Boyer Olvera, sales and marketing director at America’s Best Value Inn, said about 60 to 80 people come to each Comedy Night, and there’s a good core of people who usually show up.

Comedy Night is held in the event center at the hotel, and there is a private bar available to guests.

Boyer Olvera said the shows aren’t necessarily family friendly, but the comics don’t get too dirty. Typically, audience members are over 21.

The main drive to bring Comedy Night to Albert Lea, Boyer Olvera said, is to give residents the opportunity to go to events without having to leave town.

“We’re trying to keep it local,” she said.

Boyer Olvera said all of the comedians so far have been great and she hopes the community embraces the events that she and America’s Best Value Inn are trying to bring to town.

Boyer Olvera said the comedians are announced to them in three-month increments by their contractor, Funny Business. Funny Business will provide the next three months of comedians for December, January and February after Bush’s performance this month.

Where to buy: America’s Best Value Inn or at the door on the day of the event