Funeral services for Dorothy Mae Buchanan will be at 11 a.m. Wednesday at Bayview/Freeborn Funeral Home. The Rev. James Petersen will officiate. Visitation will be one hour prior to the service. Interment will be at Hillcrest Cemetery. Online condolences are welcome at www.bayviewfuneral.com. 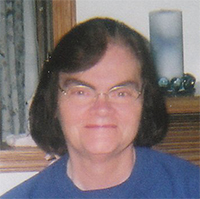 Dorothy Buchanan was born on Oct. 4, 1939, in Albert Lea, the daughter of Frank and Ruby (Fahs) Lembke. Dorothy attended school district No. 81 in Alden and Albert Lea. She married Floyd H. Peterson on June 9, 1956; with this union they had five children: Richard, Linda, Loretta, Elaine and Scott. They later divorced. She married Jesse “Buck” Buchanan on June 20, 1977; with this union they had one son, Frank. She worked at Lea College and several restaurants in Albert Lea as a cook. She last worked at the Ventura plant before retiring. She was a confirmed member of Salem Lutheran Church. After she retired she enjoyed making baked goods for family and friends. She enjoyed spending time listening to country music and spending time with her family, especially her grandchildren and great-grandchildren.

Dorothy was preceded in death by her parents Frank and Ruby Lembke and husband Jesse “Buck” Buchanan.