Election turnout down from 4 and 8 years ago

Almost the same percentage of registered voters in Freeborn County cast their ballots in Tuesday’s general election as they did four years ago when the same races were up for vote, according to unofficial results from the Freeborn County Auditor-Treasurer’s Office.

The county had a 67.9 percent turnout Tuesday, while in 2010, there was a 68.8 percent turnout. Four years before that, in 2006, the turnout was 72.7 percent. These years — called midterm elections by the national media — did not have a presidential race but had races for governor and sheriff, among others. 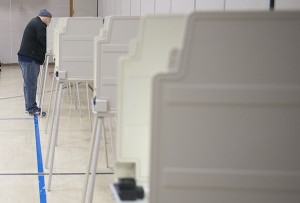 She said it appears the federal offices and the governor’s race brought out the most people, along with the local sheriff’s race.

Numbers will be finalized Friday.

In the sheriff’s race, deputy Kurt Freitag defeated incumbent Sheriff Bob Kindler by almost 1,000 votes in what has arguably been one of the most heated races in the area.

Minnesota’s pride in its voter turnout took a beating this midterm election, with only about half of eligible voters taking the trouble to show up.

Unofficial numbers from the secretary of state estimate Tuesday’s turnout at 50.31 percent, well below the projection of 55 to 60 percent.

The lower figure may reflect a lack of interest in top races such as governor and Senate, which were not seen as close. Six of the state’s eight U.S. House races also weren’t seen as all that competitive.

The state’s adoption of no-excuse absentee voting has been popular. The number of people voting by absentee rose from about 6 percent in 2010 to almost 10 percent this year.

A sharp drop in turnout, a wave of voter unhappiness with both parties and a geographically favorable slate of Senate races combined to give the GOP the advantage it needed to pull off an unexpectedly strong victory Tuesday, according to exit polls conducted for The Associated Press and television networks.

Disdain toward both parties dominated.

The vast majority of voters had a negative view of one or both parties and about either President Barack Obama or Republican leaders in Congress. Where those groups overlapped — among voters who had an unfavorable opinion of both Democrats and Republicans (17 percent) and those who were dissatisfied or angry with both the Obama administration and Republicans in Congress (28 percent) — Republicans gained a clear advantage. These voters favored Republican candidates by about a 2-1 margin.

These groups took negative views on two key issues, too. Three-quarters of those who were unhappy with both Obama and Republican leadership felt that the economy is getting worse or is already bad and stagnating. Two-thirds of them said the 2010 health care law went too far. They were more likely to feel anger toward Obama than GOP leaders, 38 percent to 25 percent.

Among those who said they had an unfavorable view of both parties, pessimism reigned. Eight in 10 said the country is on the wrong track, two-thirds said life will be worse for the next generation. Seven in 10 think the government is doing too many things better left to businesses and individuals.

In the five states in this group with Senate races, 58 percent said they were angry or dissatisfied with the Obama administration and 63 percent felt that way about the Republican leaders in Congress. Colorado voters were most apt to express dissatisfaction with both, 37 percent, and these voters broke by a 3-1 margin in GOP Rep. Cory Gardner’s favor.