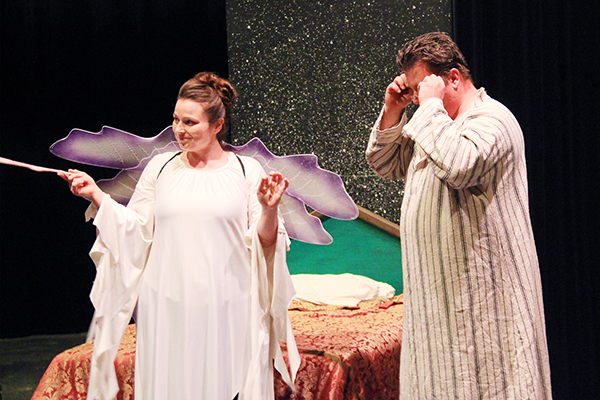 Actors will stumble on stage and fumble their lines. Cues will be missed and sound effects botched. The set will fall apart. And the show will go on, much to the delight of real live audiences at the upcoming “A Dickens’ Christmas Carol: A Traveling Travesty in Two Tumultuous Acts.”

“This is a parody of the ‘Christmas Carol,’” said Brian Mattson, an experienced actor in the director’s seat for the first time. “You will get to see people on the stage deal with problems that all actors have had one time or another. It’s just funny to watch the show. Because everything that can go wrong, will go wrong for this cast, and this is an incredible cast.” 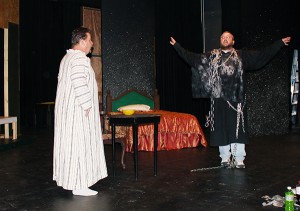 This “Christmas Carol” reunites some veteran actors from ACT’s 2011 presentation of the traditional story — Mattson, Howland, Paul, Dye and Severtson.

White has played roles in many ACT productions, including “Lend Me a Tenor.” Making their debuts on the ACT stage are Nelson and Bryant, though they have theater experience elsewhere.

“It’s every actor’s nightmare,” Howland said of this “Christmas Carol.” “You have actors forgetting their lines. You have people wearing the wrong costumes. You have lights coming on at the wrong time.”

“A Dickens’ Christmas Carol: A Traveling Travesty in Two Tumultuous Acts” is a fresh twist on the classical tale by Charles Dickens, who published the novella in 1843. It was adapted to a movie in the early 1900s and premiered as a Broadway musical in 1994.

Ebenezer Scrooge is still bitter and miserly. The ghosts of Christmas Past, Present and Yet-to-Come still appear in an effort to infuse Scrooge with Christmas spirit.

However, playwright Mark Landon Smith turns the traditional into hilarity with this story of an English theater group trying to tell the Dickens’ story without their star. The Styckes-Upon-Thump Repertory Theatre Company, a stuffy old travelling troupe, is embarking on its 15th annual and farewell tour of “A Christmas Carol.” In an attempt to cancel the show, their diva feigns illness. To her shock and dismay, the show goes on.

The understudy finds herself on stage knowing only one line. This novice has written her part in and on almost everything, including the Christmas pudding.

Midway through the doomed performance, the diva rushes in to reclaim her role. Total mayhem ensues as the company frantically struggles to keep the show going while everything is going merrily wrong.

What: “A Dickens’ Christmas Carol: A Traveling Travesty in Two Tumultuous Acts”

Where to buy: ACT’s call center at 1-877-730-3144, actonbroadway.com, the box office and the Albert Lea Convention and Visitor’s Bureau