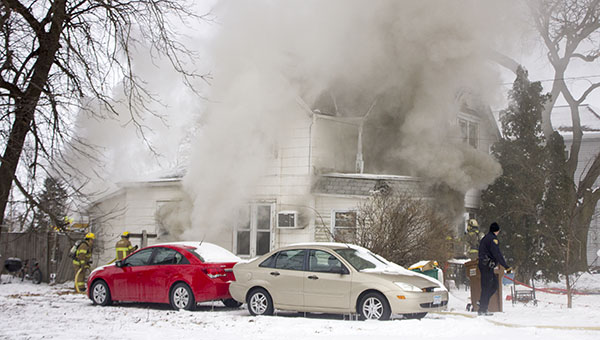 Smoke billows out of the windows of a home at 248 N. Broadway in Alden Tuesday afternoon. — Sarah Stultz/Albert Lea Tribune

Grandparents, child get out safely, so does a parrot and a cockatiel

ALDEN — A family of six is without a home after a fire that started Tuesday morning in their basement.

Marcelino Talamantes, who lives in the home with his wife, Gabrielle, their two children and his parents, said he and his wife were running some errands with their 3-year-old daughter, Stormy, when they received a call from his mother, Roxie. 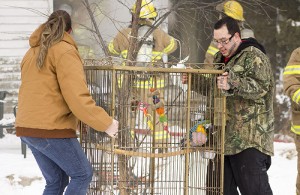 Katie Hallman, left, and Marcelino Talamantes carry a pet parrot away from 248 N. Broadway in Alden on Tuesday as firefighters put out a fire at the house. — Sarah Stultz/Albert Lea Tribune

“She said to get home because the house was on fire,” Marcelino said.

Roxie was at home at the time with their 3-month-old son, Odin, and her husband, who is also named Marcelino.

The three safely got out of the house, and firefighters removed the family’s two pets, a parrot and a cockatiel unharmed.

“I’m just glad everybody is OK,” Gabrielle said as she watched firefighters from Alden, Conger, Freeborn and Wells respond in the 16-degree weather.

Because of the structure and age of the house, firefighters first tried to attack the blaze from the outside, said Alden Fire Chief Jim Thunstedt. He noted it was difficult to get to the area the fire was believed to have started, and he called in firefighters from the other departments as a precautionary measure.

“We were afraid it might get away from us,” Thunstedt said.

The fire burned through the floorboards into the main level of the home, and smoke could be seen billowing out of all of the windows.

Thunstedt said the cause of the fire is unknown. 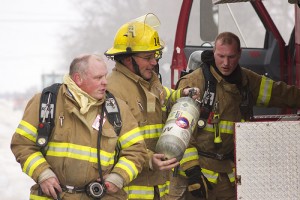 Firefighters prepare to fight a fire in a home at 248 N. Broadway in Alden on Tuesday. — Sarah Stultz/Albert Lea Tribune

The Freeborn County Fire Investigation team was called in to investigate, likely with the State Fire Marshal’s Office.

Marcelino Talamantes said his parents have owned the house for 12 years.

The house is less than a block north of Alden-Conger School on the opposite side. Several students at the school came out to see what was taking place but returned inside shortly after.