Freedoms were given to us by our veterans

Something About Nothing by Julie Seedorf

Recently I saw a cartoon where a man and woman were looking out over a lake with a child playing nearby in the grass. Underneath that plot of land, holding it up, were Marines, Navy, Army and Air Force veterans. It was just a cartoon, but it lingers in my mind having the effect that something does when it has meaning. It lingers long after the event occurs. 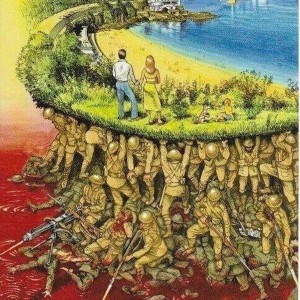 Seeing that picture made me look at the life I have here today in the United States in a different way. We would not have the life we have if it weren’t for all of those who have fought to protect our freedoms. Yes, I know I say that every year, but if I take a few moments to ponder the fact that because of those men and women I can write this column, I can voice my thoughts. I am free to do that.

I can choose the religion of choice to worship. I don’t have to do it in secret. My grandparents who came over from Poland in the late 1800s and early 1900s could have told you about religious persecution.

I have many freedoms now because of those who defended that freedom. Living in the world I do today, and at the age I am, I don’t think I still fully understand what the word freedom means the way my mother and father did. They lived through the Great Depression. They lived through two world wars and they did not take their freedom for granted because they saw the sacrifice that not only those in combat made, but also they knew the sacrifice of those families, men, women and children here at home during the war. Life back home in those days did not go on as if the wars weren’t being fought.

The United States has been in many wars since World War I and II. We still have men and women fighting and sacrificing their lives. We have families deeply affected by their loved ones being so far away. We lament and we mourn and we argue that all of this is going on, but I don’t see or hear the stories of sacrifice from most of us that you hear from the world wars.

Our lives, as the wars waged on elsewhere, pretty much went on the same, except for the 9/11 attacks. At that time we Americans were forced to stop and take notice because the attack was on our soil.

We don’t seem to care anymore that we have the freedom of religion to worship as we choose because the next game or sports event is more important than attending church and being with our church family.

Franklin Roosevelt delivered what was known as his “Four Freedoms” speech, which was technically the 1941 State of the Union address. He stated four freedoms he felt that people everywhere should have. They were freedom of speech, freedom of worship, freedom from want and freedom from fear. This speech was delivered 11 months before the United States declared war on Japan on Dec. 8, 1941.

Speech and religion are protected by the United States Constitution.

It is my opinion that with the hard-fought freedom comes responsibility to not abuse that freedom. Free speech does not mean massacring someone with your tongue and bullying someone into silence. It means letting them respectfully speak, listening to what they have to say, with us doing the same.

Freedom of religion does not mean imposing your religious beliefs on someone else. It means letting people choose what is right for them and respecting that decision. We should be able to carry out these two freedoms without fear of reprisal.

And now we have the ever popular debate about drones. I don’t know if our ancestors would consider this to be a safeguard of our freedoms or an encroachment on our freedoms. Is the monitoring freedom from fear?

Dictionary.com describes freedom this way: the state of being free or at liberty rather than in confinement or under physical restraint, exemption from external control, interference, regulation, etc., the power to determine action without restraint, political or national independence. Personal liberty, as opposed to bondage or slavery, exemption from the presence of anything specified (usually followed by from), freedom from fear, the absence of or release from ties, obligations.

Those soldiers, sailors, airmen and Marines who held up America’s freedoms in that cartoon have given us the freedom we have today in whatever form that happens to be in our mind. We should not take it lightly.

There is the saying that you don’t appreciate what you have until it is gone. Appreciate that freedom today and on Tuesday and say thank you to a veteran. Take the time to remember the sacrifice that has gone into that freedom from those that have served, to those that were left behind to support our troops and our country from our home shores. Remember.

Wells resident Julie Seedorf’s column appears every Monday. Send email to her at thecolumn@bevcomm.net. Her Facebook page is www.facebook.com/sprinklednotes.