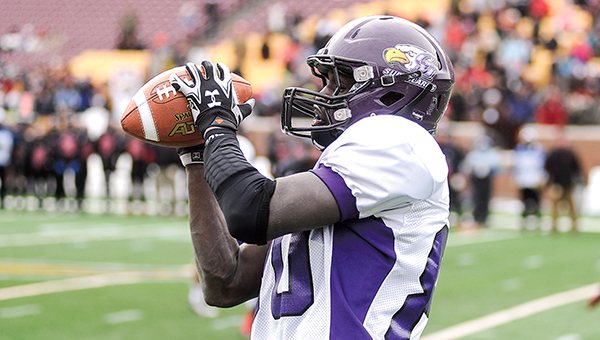 Grand Meadow’s Cody Ojulu hauls in a pass that he turned and ran for 56 yards for a second-quarter touchdown in the Minnesota State Prep Bowl Nine Man championship Friday against Edgerton-Ellsworth at TCF Bank Stadium in Minneapolis. — Eric Johnson/Albert Lea Tribune

MINNEAPOLIS — The Superlarks have been nothing short of dominant this season, so it was no surprise when they controlled the Prep Bowl from the start in a 48-0 win over Edgerton/Ellsworth at TCF Bank Stadium in Minneapolis Friday.

The win gives Grand Meadow two straight 9-Man state football titles, and it caps off a postseason that saw the Larks outscore their opponents 240-6 in the postseason and 117-0 in the state tournament.

“It’s an unbelievable feeling getting that first one, and now to get two in a row,” Grand Meadow coach Gary Sloan said. “I’m very, very proud. Our defense is amazing. It’s the most athletic bunch we’ve ever had, but they play so well together. Everybody does their job, and they count on each other. Last year, our defense was very good, and this year it’s even better yet.”

The Superlarks (14-0 overall) didn’t just shutout the Flying Dutchmen (12-2 overall), they bewildered them. Grand Meadow picked off four passes and recovered a fumble. In all, Edgerton-Ellsworth, which averaged 40 points per game this season, only ran a handful of plays in Grand Meadow territory.

“We didn’t think we could hold them to zero for the whole game. That’s three straight shutouts in the state, and I don’t think anyone’s ever done that,” Michael Stejskal said. “Last year we looked forward too much, and this year we focused on each team one by one. I think that was the big factor for our team this year.”

On offense, the Larks did what they wanted no matter how they chose to do it. Landon Jacobson ran for 143 yards and three touchdowns and Stejskal threw for 215 yards and three scores.

Cody Ojulu made a big 20-yard catch on a 3rd-and-8 to set up a touchdown on Grand Meadow’s opening drive, and he also hauled in touchdown grabs of 56- and 21-yards.

“We knew they were really good at stopping the run,” Ojulu said. “We wanted to spread it out on them, and we knew we could beat them with the run or the pass. We did both today.”

Jacobson, who is Grand Meadow’s all-time scoring leader, had a big impact in Grand Meadow’s win on both sides of the ball as he picked off a pass and recovered a fumble. Sloan said Jacobson finally earned the title as the best Superlark ever.

All of Grand Meadow’s seniors had a big impact in the win. Jacobson and Ojulu did their damage, Blake Olson hauled in a key 56-yard touchdown pass that made it 33-0 right before the half, and Wyatt Richardson and Jordan Miland were solid on the offensive and defensive lines.

“They really did step up,” Sloan said. “We try to involve those guys as much as we can, but that wasn’t by design. All of the seniors were very active today.” 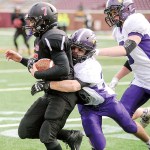 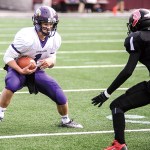 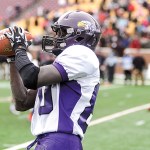 Grand Meadow’s Cody Ojulu hauls in a pass that he turned and ran for 56 yards for a second-quarter touchdown in the Minnesota State Prep Bowl Nine Man championship Friday against Edgerton-Ellsworth at TCF Bank Stadium in Minneapolis. — Eric Johnson/Albert Lea Tribune