Funeral services for Harriet Lorraine Rice Myhre of Hartland will be at 3 p.m. Saturday at Cross of Glory Lutheran Church in Hartland. The Rev. Dr. Mark Hillmer will officiate. Visitation will be from 4 to 7 p.m. Friday at Bonnerup Funeral Service in Albert Lea and one hour prior to the service at the church. Interment will be in the Hartland Cemetery. 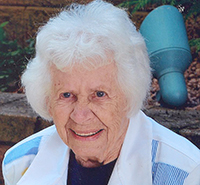 Harriet Lorraine was born Sept. 16, 1924, to Henry and Fern Jacobson Rice in Hartland Township. She was a member of Cross of Glory Lutheran Church in Hartland where she was baptized and confirmed. She belonged to Ladies Aid, Altar Guild and had been a Sunday school teacher and also taught Bible school. She also was a member of the American Legion Auxiliary. Harriet worked for the New Richland School District in the cafeteria. She also worked at the New Richland Care Center.

Harriet graduated from Freeborn High School in 1942. She married Carl Joe Myhre in Hartland on Sept. 12, 1947.

She was preceded in death by her parents; her husband, Joe; brothers-in-law Ray Miller and Clifford Johnson; and sisters-in-law Elaine Myhre and Marvel Johnson.