Loretta Barbara Brummer, 92, of Wells died Wednesday, Nov. 26, 2014, at Parkview Care Center in Wells. A Mass of Christian burial will be at 1:30 p.m. Saturday at St. Casimir Catholic Church in 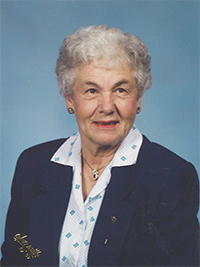 Wells. Visitation will be one hour prior to the service on Saturday at the church. Interment will be in St. Casimir Catholic Cemetery and the Rev. Thomas Niehaus will officiate. Please see www.brussheitner.com to leave online condolences. Bruss-Heitner Funeral Home of Wells is assisting the family.

On May 12, 1943, she was united in marriage to Philip J. Brummer at St. Casimir Catholic Church. After their marriage Loretta and Philip farmed and raised their family west of Alden. She moved into Alden in 1980. Loretta was a lifelong member of St. Casimir Catholic Church and member of the St. Anthony Circle. She was also an active member of the Alden American Legion Auxiliary, Wells VFW Auxiliary and the Wells Bowling Association women’s league for 25 years. She enjoyed watching sports and was an avid Minnesota Twins fan. Loretta loved gardening, especially her flowers, and oil painting and time spent with her grandchildren and great-grandchildren.