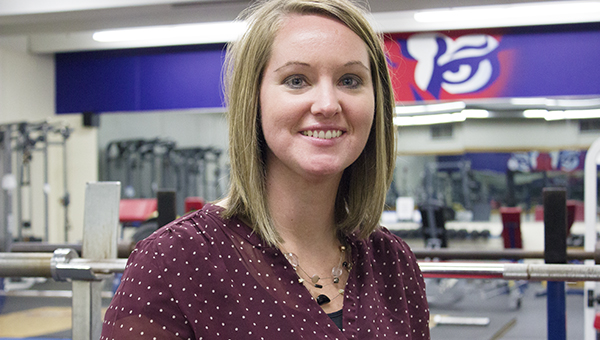 Albert Lea High School has a new activities director who is excited to move the athletics program forward.

Afton Wacholz is the new high school activities director, though she has worked with the high school previously as an athletic trainer.

Wacholz has been a certified athletic trainer for nine years with Mayo Clinic Health System in Albert Lea. She graduated from Minnesota State University, Mankato, before working at the clinic.

She said an activities director position was always on her radar for the future. She loves the world of sports and wanted to pursue something different in her career and step up.

When the activities director position at the high school opened up, Wacholz said it was sooner than she expected, but after conversations with her husband, they decided it was something she needed to pursue and take advantage of.

On Sept. 22, Wacholz started as the new activities director.

“It’s been quite the ride,” she said.

Wacholz said she’s learning as she goes as she familiarizes herself with the Minnesota State High School League.

So far her first month has been positive, she said, and she’s very excited to see where the department will go.

Wacholz is from Albert Lea and went to Albert Lea High School. She was involved with dance at Joyce Matthies Dance Center and played tennis, basketball and softball at school.

The job itself entails a lot, Wacholz said. She runs activities, schedules events, deals with behavior issues and is an advocate for coaches.

Wacholz said the transition between jobs was nice as she already knew a lot of the coaches and players, though she said her new position is demanding.

Wacholz said there is value in being a student-athlete but said she also wants to focus on other activities and fine arts.

She wants the student body to see the importance of student activities and one of her goals is to increase student involvement. Wacholz said she wants to bring out the lifelong lessons that come out of being involved with school activities.

She said that the one of the most important things students can take out of activities are the experiences, not wins or losses. Despite the football team not getting any wins — though coming very close in their game with Austin — Wacholz said the new coach, Kevin Armbrust, is a good role model and younger players got a chance to step up.

Wacholz said this football season was a stepping stone and said she’s excited for the future. She said that there’s no overnight fixes. Wacholz said she also wants to support student leaders such as having more speakers and conferences.

Interesting fact: Her mother was watching Family Feud while she was pregnant with her, and saw a contestant named Afton, which is how she got her name.