A Nevada man was sentenced to four years and 10 months in prison on Thursday for possessing 1 1/2 pounds of methamphetamine in a vehicle on Interstate 35 last year. 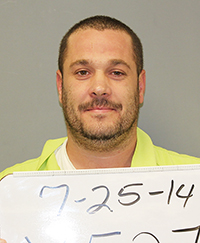 Bradley Jay Glewwe, 34, of Reno, Nev., was driving a vehicle pulled over by a Minnesota State Patrol trooper on Aug. 20, 2013, between the Clarks Grove and Geneva exits of I-35.

Court documents stated he was traveling with two others to the St. Paul area, where they planned to sell the the drug. They had purchased it for $10,000 in the Reno area, and were planning to sell it for about $30,000.

Along with the meth, troopers found marijuana pipes, a meth pipe, a digital scale and more than $10,000 in cash in the car.

He pleaded guilty last month to one count of second-degree drug possession, a felony, and will be required to serve two-thirds of his sentence in prison, while the remainder will be spent on supervised release.

Co-defendant Edward Ben Rourke, also of Reno, was sentenced to four years in prison earlier this year. A second passenger, Rourke’s wife, was not charged.